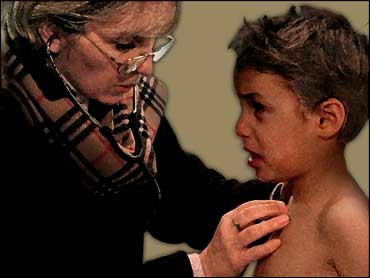 The nation's surging population of Hispanic children has a disproportionate share of asthma, obesity and other health problems that are not being adequately treated, researchers warn in a new report.

The problem is urgent, said Dr. Glenn Flores, a Boston Medical Center physician and lead author of the report in Wednesday's Journal of the American Medical Association.

"If the disparities continue it has the potential to affect the health and productivity and well-being of our entire nation," Flores said.

There were 12.3 million Hispanics under age 18 in 2000 – the largest such minority group in the country, according to Census Bureau data. The population is expected to grow in coming years.

Yet because of cultural barriers, a lack of awareness about the ethnic group's health needs and perhaps racial bias, many Hispanic children receive sub-optimal health care, the report suggests.

Compared with whites and blacks, Hispanic children "are much more likely to have no health insurance, drop out of school, have no regular doctor ... to have cavities, to attempt suicide if they're a girl, to be obese if they're a boy," Flores said.

There aren't clear reasons for the disparities because Hispanic children are rarely included in medical research, he said.

Flores is the chairman of the Latino Consortium, an American Academy of Pediatrics-sponsored group of experts that examines research and policy issues in Hispanic children's health. The JAMA report is a consensus statement based on consortium members' views of critical health needs.

The U.S. Hispanic population jumped 58 percent from 1990 to 2000, according to census data. Nearly 35 percent are under age 18, compared with 26 percent of the nation's overall population.

"The demographics have changed so quickly that we're now in a position of having very limited data to understand what's happening," said Dr. Elena Fuentes-Afflick, a San Francisco pediatrician and consortium member.

Dr. Dennis Styne, chief of pediatric endocrinology at the University of California at Davis, has many Hispanic patients he said are disproportionately affected by obesity and diabetes.

Styne said genetics and cultural norms may partly explain why. "Middle-class Caucasian culture doesn't accept heavy body size," but it may be less of a taboo among Hispanics, he said.

According to the report, data shows that: