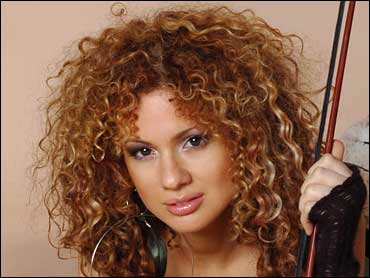 Violinist Miri Ben-Ari had to wait a long time before she was able to release her instrumental track "Symphony of Brotherhood."

"I wrote this song a long time ago, maybe six or seven years ago," Ben-Ari said during an interview with The ShowBuzz. "You know how it is, when you have an instrumental song and you're trying to break as a major artist on a major label, it's very hard sometime to convince the so-called 'industry' that instrumental music, like they used to have back in the day, is actually going to work again."

But Ben-Ari has faith in her audience and knew that they would be able to listen "outside of the box" and be open to an instrumental recording.

"I think the industry generally underestimates people when it comes to their judgment of music," she said. "I don't, because every time I perform I get so much love and support from my audience. When it came time for me to put out that single I said 'I'm going to do that no matter what.' "

Sure enough, the track entered the Billboard R&B/Hip-Hop Sales Chart at an unprecedented No. 3 seven weeks ago and now sits in the No. 2 spot.

Ben-Ari's journey from child prodigy to hip-hop violinist began when she was growing up in Israel.

"I started at 6 years old with [the] Suzuki [method], with a little violin; I guess I liked it, because I wanted to continue."

She continued her classical studies in Israel where she was mentored by legendary violinists Isaac Stern and Yehudi Menuin. She fell in love with the music of Charlie Parker as a teenager and came to New York to study jazz at the Mannes School of Music.

The late jazz vocalist Betty Carter, who has mentored many great musicians, heard Ben-Ari play and invited the violinist to study in her JazzAhead program.

She recorded two jazz albums and worked with trumpet great Wynton Marsalis. But everything changed after her playing caught the attention of hip-hop superstar Wyclef Jean.

"Wyclef was the first one who actually looked at me and said, 'She's not just another musician, she's an artist that can step from the back of the stage to the front and carry a show by herself.' "

Jean dubbed her the "hip-hop violinist" and encouraged her to continue working in that genre.

Her career took another turn in 2001 when she appeared on "Showtime At The Apollo," unaware of the Harlem venue's notoriously demanding crowd.

"It wasn't scary for me because I was pretty ignorant about the Apollo when I got there," she said with a laugh. "You're talking about a violinist from Israel who came to America to study jazz … For me it was just another stage."

Her breakthrough debut performance earned her a standing ovation and she eventually became an Apollo legend.

Since then Ben-Ari has traveled the world with Jay-Z and Busta Rhymes, and is currently on the road with The Roots. She's also written string arrangements for Britney Spears, Kanye West, John Legend, Maroon 5, Patti LaBelle, and Wynton Marsalis.

She earned her first Grammy in 2004 as co-writer of West's single "Jesus Walks," which won for best rap song.

Next up, she'll be focusing on her upcoming album.

"I'm not afraid to break all the rules with this one. Now with the success of 'Symphony of Brotherhood' I can move forward full steam."
By Judy Faber