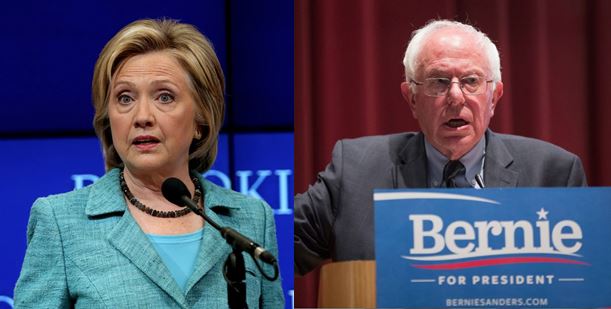 Former Secretary of State Hillary Clinton continues to hold a double-digit lead in the Democratic race for the nomination nationally, but Sen. Bernie Sanders is gaining on her. Clinton now has the backing of 47 percent of Democratic primary voters (down from 58 percent), while Sanders comes in second, with 27 percent (up from 17 percent). Vice President Joe Biden, who has yet to announce whether he is running for president, receives support from 15 percent of Democratic primary voters.

More than five months before the start of the primary contests, most Democratic voters say it is too early to say that their minds are made up about which candidate they will support. But Clinton's backers are more firm in their choice than those backing other candidates.

Since last month's CBS News Poll, Clinton has lost ground among a number of demographic groups, while Sanders has made some gains. Clinton maintains a large lead among women and moderates, but those leads have narrowed. Her support among men has dropped considerably and Sanders only trails her by 5 points.

Clinton's advantage with Democratic voters under age 50 has evaporated, and she and Sanders are now even. However, Clinton still has a large lead with older voters. Last month, Clinton was ahead of Sanders by double-digits among liberals, but Sanders now has a 5-point edge with this group.

(Table has been truncated. Not all candidates listed.)

About half of Democratic primary voters nationwide say they would enthusiastically support Clinton if she became the party's nominee. A quarter would support her with some reservations and another 15 percent would only back her because she is the nominee. Six percent would not support her.

Perhaps not surprisingly, Clinton's current supporters are especially likely to be enthusiastic about her. Views are more mixed among those not currently backing Clinton- only about a quarter would enthusiastically support her.

While 48 percent of Democratic primary voters say they would enthusiastically back Clinton, fewer Republican voters say that about their frontrunner, Donald Trump (35 percent).

When Clinton's supporters are asked in an open-ended question why they want her to be the nominee, the top answer is that she has the right experience (16 percent), followed by it's time for a woman president (13 percent), and that she is the best candidate for the job (10 percent). Also mentioned by Clinton supporters is her association with Bill Clinton (9 percent). Agreement on the issues, and electability are also cited.

As the vice president weighs a potential run for president, 57 percent of Democratic primary voters would like to see him jump in the race - although a third don't think he should.

If Biden chooses not to run for the Democratic nomination, Hillary Clinton's lead over Sanders widens, from 20 points with Biden in the race to 30 points without him in the running.

Fifty-five percent of Democratic voters see Clinton as the candidate with the best chance of winning the general election; however that figure is down from 78 percent last month. Biden is a distant second on this measure, but the percentage that sees him as the most electable has risen.

Still, when asked which is more important in a nominee, Democratic voters pick issues over electability.

Similar to last month, no single Democratic candidate or potential candidate stands out as unacceptable as the nominee to these primary voters.

The Democratic candidates, or potential candidates, perform well on some key characteristics among their party's primary voters. Majorities see Clinton, Sanders and Biden as honest and trustworthy and as having strong leadership qualities. Biden does the best of the three on honesty, while Clinton's strength is leadership.

Thirty percent of Democratic primary voters don't think Clinton is honest and trustworthy, twice as many as say that about Sanders (15 percent), but 27 percent don't have an opinion of him on this.

On all of these measures, about a quarter of Democratic voters do not have an opinion of Sanders.

As questions continue about Hillary Clinton's use of a personal email address and server while Secretary of State, most Democratic primary voters are satisfied with her explanation of the matter and say it hasn't impacted their overall views of her.

But it's a different story among the American public overall. Half of Americans are now dissatisfied with her explanation, while just about a third are satisfied. The public's views on this were split back in March, shortly after the issue came to light.

Most Americans say the email controversy has had no effect on their overall opinions of Clinton, although 36 percent say their opinion of her has grown worse. It is mainly Republicans, more than six in 10, who say their views of Clinton have become worse.

At the same time, 55 percent of registered voters nationwide don't see Trump as honest and trustworthy either. Both Clinton and Trump, however, get good marks on leadership.

Of the six candidates tested, Biden, Carson and Bush do the best on honesty. More see Sanders as honest than not, but like Carson, many don't have an opinion of him.

The margin of error for the sample of 351 Democratic primary voters is 6 percentage points.