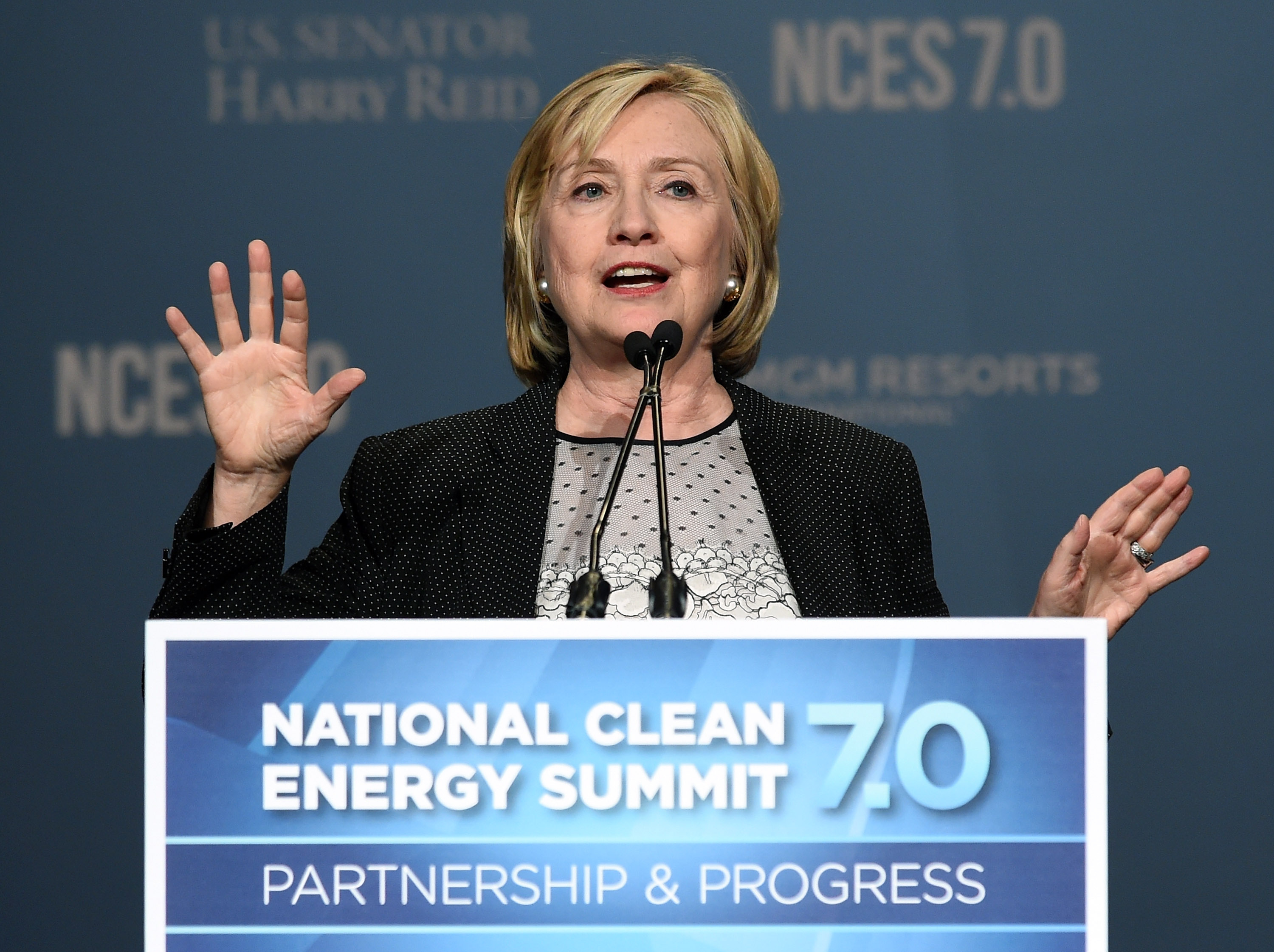 Hillary Clinton predicted Thursday the United States will become the leading 21st century "superpower" in clean energy if the nation confronts the "most consequential, urgent, sweeping collection of challenges we face."

"We shouldn't have to state the obvious ... the data is unforgiving" in demonstrating that climate change and environmental crises are at hand, Clinton said at the National Clean Energy Summit in Las Vegas.

Waving off a passionate sector of Americans who believe otherwise, she cited melting ice caps and the discovery of "carbon dioxide in our atmosphere not seen in millions of years" as evidence of potentially disastrous climate change.

"The threat is real - but so is the opportunity," Clinton said.

"If we come together to make the hard choices, the smart investment in infrastructure, technology and environmental protection, America can be the clean energy superpower for the 21st century," she added.

The speech, which yielded little news but drew impressive audience numbers and hefty national media coverage, was a safe bet for Clinton on all fronts. It offered the 2016 Democratic presidential early frontrunner a chance to plug her book, "Hard Choices," her work as secretary of state and the Clinton Global Initiative. She was also squarely among friends.

Clinton was introduced by her longtime cohort and former colleague, Senate Majority Leader Harry Reid, D-Nev., who largely orchestrated the event. And she concluded her remarks with a Q&A moderated by longtime family adviser John Podesta, who's rumored to top a shortlist of contenders to chair her White House campaign should she mount one.

Coincidentally, though, the summit's timing pitted Clinton in something of an unplanned head-to-head against a potential 2016 Republican rival. Just 24 hours earlier, New Jersey Gov. Chris Christie delivered before a crowd in Mexico City a strongly conservative approach for how to seize on "the North American energy renaissance."

Predictably, the two diverged on most points, including fracking. While Clinton touted "smart regulations" such as "deciding not to drill when the risks are too high," Christie came out boldly in favor of approving the Keystone XL oil pipeline, which President Obama has repeatedly delayed.

Still, the two did find one piece of common ground: Throwing a line to European allies who currently depend on Russian gas and energy.

Christie on Wednesday pointed to Russian President Vladimir Putin's continued backing of radical separatists in eastern Ukraine as a consideration.

"In the short and even medium term, Europe will remain heavily dependent on imported Russian gas and energy," Christie said. "But in the long term, the strategic value of reducing this dependence is now clearer than ever."

Indeed, Clinton said in her remarks Thursday, some planks on the "safe-bridge to a clean energy economy... will certainly come from natural gas."

If the United States does it right, she added, it can be an optimal example "of American innovation changing the game" by offering European partners to "lessen their dependence on Russian energy."