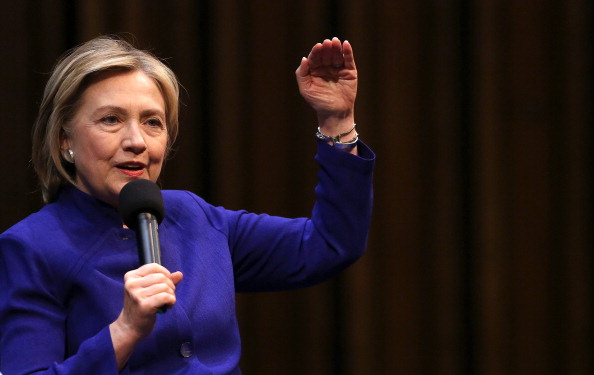 WASHINGTON - Former Secretary of State Hillary Rodham Clinton said Monday that the U.S. and Europe should work together to develop tougher sanctions on Russia while she backed President Barack Obama's calls for a thorough investigation into the passenger jet that was shot down last week over Ukraine.

Clinton said in a Facebook chat from the company's headquarters in Menlo Park, California, that tougher sanctions would make clear to Russian President Vladimir Putin "that there is a price to pay for this kind of behavior." The former secretary of state said she agreed with Obama's comments earlier Monday urging "immediate and full access" for investigators combing through the wreckage of the downed plane.

"We should do more to ensure a thorough investigation that not only respects those who were murdered in the attack on the plane, but also tries to find answers to who is responsible," Clinton wrote during the question-and-answer session on the popular social media site.

Obama accused pro-Russian separatists of removing evidence and bodies from the crash site and said the burden was on Russia and Putin to compel the separatists to cooperate with the investigation. He said if Russia continues to violate Ukraine's sovereignty, Moscow "will only further isolate itself" and the economic costs will increase.

Clinton said the U.S. should encourage Europeans to ensure that they are less dependent upon Russian energy. She called for "more support given to the Ukrainians to guard their borders and protect themselves."

The statement mirrors a similar one from Secretary of State John Kerry recently, who said on Fox News that he is "trying to encourage our European friends to realize this is a wake-up call." Kerry has been prodding the European Union about increasing sanctions recently. Though the E.U. imposed sanctions on several Russian officials after Moscow's invasion of Crimea, the organization has failed to actually impose the sanctions amid worries that they might negatively affect European export markets and gas supplies.

In the Facebook Q & A, Clinton also said she was hopeful for a cease-fire between Hamas and Israel to end the fighting the Gaza Strip and noted that she negotiated the last cease-fire in 2012. She said she was "fully supportive" of Kerry's work with the Egyptians to bring a halt to the fighting.

The potential 2016 Democratic presidential candidate responded to a wide-ranging list of questions on Facebook that covered her book, "Hard Choices," domestic and foreign policy issues, her favorite book and her role as a grandmother-to-be.

Asked what her first action would be if elected president, Clinton said, "answering hypothetically ... the next president should work to grow the economy, increase upward mobility, and decrease inequality."

Clinton listed her favorite book as Fyodor Dostoyevsky's "The Brothers Karamazov" and said she already had a first children's book picked out to read to her future grandchild: Margaret Wise Brown's "Goodnight Moon."

The former first lady appeared at an event at Google's Mountain View, California, headquarters earlier Monday and ended the day at a forum at Twitter's offices in San Francisco.

Clinton, who has amassed more than 1.6 million followers since joining Twitter last year, shared advice for women considering entering politics, advocated for Internet freedom and urged the U.S. to take steps to rein in student debt and the high cost of attending college.