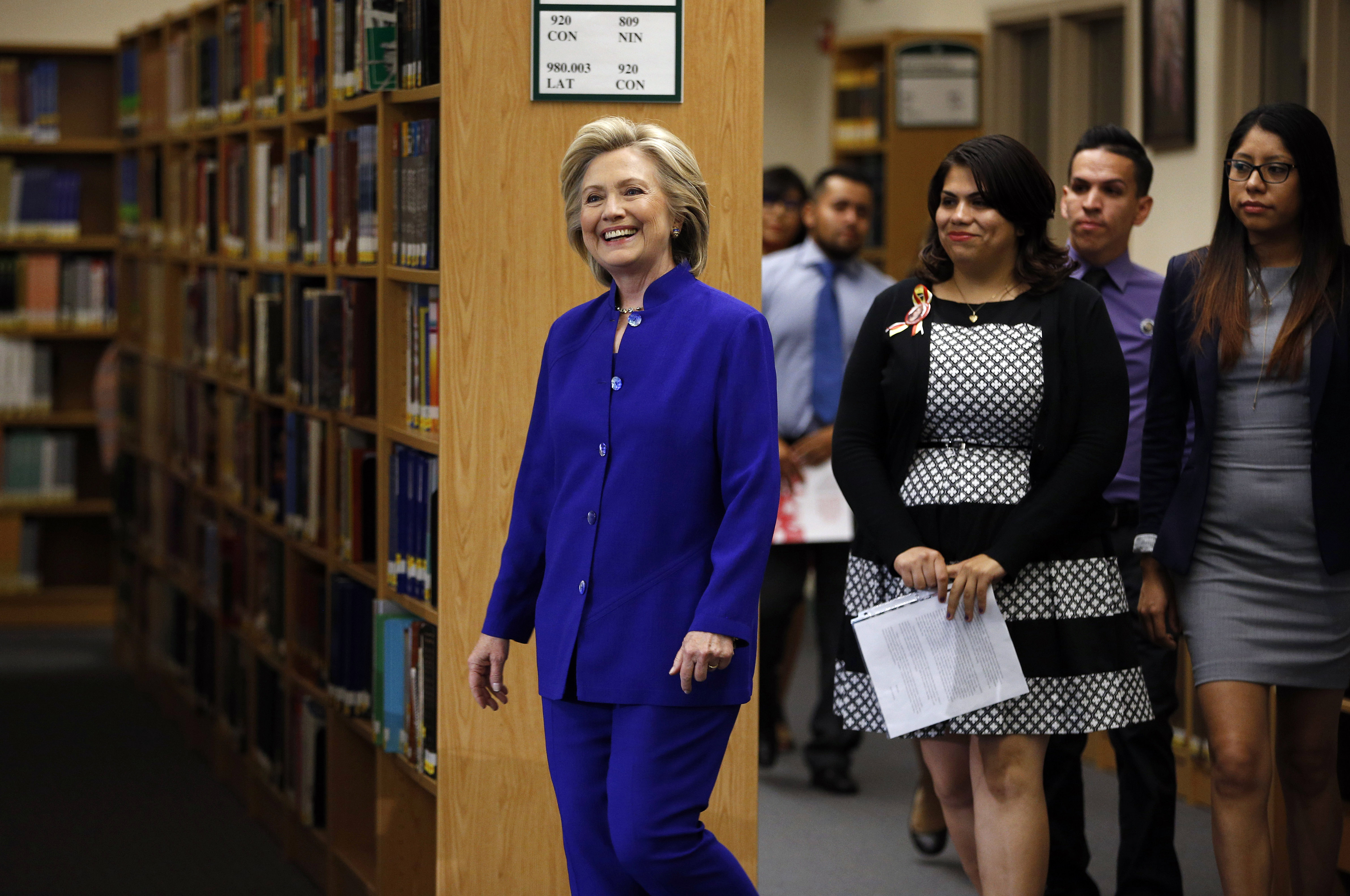 Hillary Clinton threw down the gauntlet on immigration reform during her first 2016 campaign appearance in Nevada on Tuesday, strongly backing President Obama's recent executive actions, promising to push a comprehensive reform bill that includes a path to citizenship for undocumented immigrants, and arguing Republicans simply don't pass muster on the issue.

"We can't wait any longer for a path to full and equal citizenship," Clinton declared during a roundtable discussion with young Nevadans with undocumented families. "This is where I differ with everybody on the Republican side. Make no mistakes: today, not a single Republican candidate, announced or potential, is clearly or consistently supporting a path to citizenship."

Clinton spurned the idea, floated by some Republicans, of granting legal residency -- but not citizenship -- to undocumented immigrants living in the U.S. "When they talk about legal status, that is code for second class status, and we should never forget who this debate is about," she said. "People who work hard, who love this country, who pay taxes to it, and want nothing more than to build a good future for themselves and their children."

The bulk of the 2016 GOP field has opposed immigration reform that includes a path to citizenship, dubbing it "amnesty" for people who broke the law. But handful of Republicans have struck a more moderate tone on the issue. Florida Sen. Marco Rubio, who declared his bid last month, helped spearhead the comprehensive immigration bill that passed the Senate in 2013. That measure included a path to citizenship but ultimately died in the House. Rubio now says he favors a step-by-step approach to the issue. And former Florida Gov. Jeb Bush, who's not declared but appears likely to run, has voiced his openness to a path to citizenship in the past but has recently taken to emphasizing a path to "legal status."

Both men, eyeing the GOP's eroding standing among Latino voters, have counseled Republicans that they need to move to the middle on immigration reform if they hope to win a presidential election. But Clinton seemed determined on Tuesday to deny them any advantage on the issue.

"You know where I stand, and there can be no question about it, because I will do everything I can as president and during this campaign to make this case," she said. "I know there are people who disagree with me, but I want them to have a conversation with me, because the facts are really clear."

The former first lady, senator, and secretary of state also sought to tamp down any concern on the left about her own commitment to the cause. She stood strongly behind President Obama's recent executive actions, currently tied up in the courts, that would shelter roughly 5 million undocumented immigrants from the threat of deportation. And she vowed to go "even further," if she can.

"The law currently allows for sympathetic cases to be reviewed, but right now most of these cases have no way to get a real hearing," she explained. "We should put in place a simple, straightforward, accessible way for parents of dreamers and others with a history of service and contribution to their communities to make their case and to be eligible for the same deferred action as their children."

Immigration issues have tripped Clinton up in the past: During her 2008 bid, after she seemed to dodge a question about drivers licenses for illegal immigrants, her primary opponents spun the episode into an attack on her candor. She also faced pressure -- and some public heckling -- last year to come out more strongly in favor of expanded executive action on immigration. Her remarks on Wednesday seemed designed to neutralize any potential disquiet among progressives about her stance.

Throughout her appearance, Clinton sought to personalize the debate, framing immigration not just as an economic or security issue, but primarily a "family issue."

"The young people at this table...are dreamers in much more than name," she said. "I don't understand how anyone can look at these young people and think that we should break up more families or turn away more hard workers with talent."

She recalled an early experience she had with migrant communities around Chicago. "I was recruited along with some of the other girls in my Sunday school class to serve as babysitters on Saturday for the small children so that the older children could join their parents in the fields," she recalled. "I remember going out to the camp where the families lived and taking care of the kids while kids my age were going out and doing really hard work." What really stuck with her about the experience, Clinton said, was watching the young children run to greet their parents and siblings as they returned from the field. "They're just like us," she recalled thinking.

Asked by one of the roundtable participants whether she'd make passing immigration reform her first priority as president, Clinton declined to order her agenda but said the issue would be "among my first initiatives."