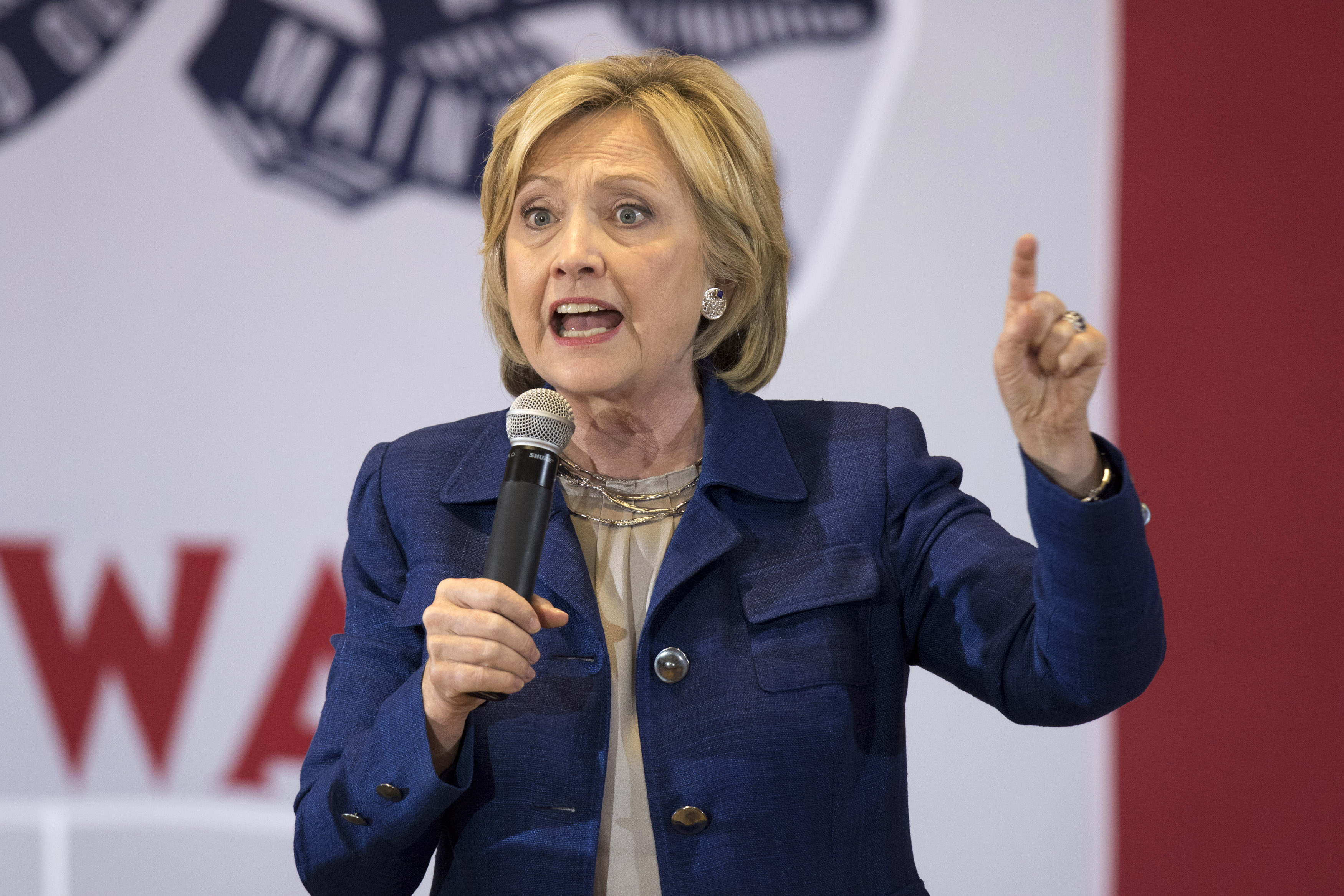 As secretary of state, Hillary Clinton advocated early on for training and equipping moderate Syrian rebels to help fight Bashar al-Assad's regime in Syria. At that time, near the end of summer 2012, the president disagreed with her, only to authorize the program two years later after she had left office.

Clinton had harsh words Sunday for what it's done so far, after the top U.S. commander in the Middle East admitted last week that only four or five moderate Syrian fighters the U.S. trained still remain on the battlefield.

"A lot of what I worried about has happened. There are now big ungoverned territories within Syria that are dominated by terrorist groups, [the Islamic State of Iraq and Syria] being the best known, but not the only one. You have Iran and Russia increasingly moving into support Assad and his constant bombardment against his own people."

And, she added, "You have these millions of refugees," referring to the further deterioration of the situation in Syria since she left office.

Clinton wrote extensively about her advocacy for a train-and-equip program in her 2014 memoir, "Hard Choices." "There are real risks to such an approach," she said in the book, citing the Afghan rebels the U.S., Saudi Arabia and Pakistan armed during the Soviet-Afghan War in the 1980s who later formed al Qaeda.

"But if rebels could be vetted and trained effectively, it would be helpful in a number of ways. First, even a relatively small group might be able to give a big psychological boost to the opposition and convince Assad's backers to consider a political solution," she wrote.

Clinton argued that the U.S. was sacrificing the chance to bring order to the flow of weapons coming to Syria from various Arab states. Those weapons often went to competing armed groups or found their way into the hands of extremists.

The key, she said, was "vetting the rebel fighters to ensure we first weeded out the extremists."

Clinton and David Petraeus, then the head of the CIA, worked on a more detailed plan and Petraeus presented it to the president. Clinton wrote that Mr. Obama was worried that arming the rebels would not drive Assad from power, and that there could be too many unintended consequences - he worried about creating another Afghanistan.

"These were very reasonable concerns, but Petraeus and I argued that there was a big difference between Qatar and Saudi Arabia dumping weapons into the country and the United States responsibly training and equipping a nonextremist rebel force," Clinton wrote. "[G]etting control of that mess was a big part of our plan's rationale."

Clinton and Petraeus did not intend for such a force to be trained to overcome the regime. "Rather, the idea was to give us a partner on the ground we could work with that could do enough to convince Assad and his backers that a military victory was impossible," Clinton wrote.

It was not a perfect plan, she conceded, but it was, in her words, the "least bad option among many even worse alternatives."

Ultimately, the president ruled against her and Petraeus, because he feared getting stuck in another sectarian war. He also wanted more time to evaluate the Syrian opposition. Clinton respected his decision and backed down, writing, "No one likes to lose a debate, including me. But this was the President's call."

Syria's civil war worsened after she left the administration, though, which left Clinton with the feeling that she and Petraeus had been right.

"The failure to help build up a credible fighting force of the people who were the originators of the protests against Assad--there were Islamists, there were secularists, there was everything in the middle--the failure to do that left a big vacuum, which the jihadists have now filled," Clinton told The Atlantic's Jeffrey Goldberg in August 2014.

Ultimately, Mr. Obama signed off on U.S. arming and training of Syrian rebels to fight ISIS. But when White House spokesman Joshua Earnest was asked about the program's failures last week, his answers made it sound as if the president never had much faith in the program.

"The president has long been skeptical of relying solely on this strategy. That's why he isn't, and our country isn't relying solely on that specific train-and-equip operation to lead our efforts inside of Syria," Earnest said. "We knew at the beginning and the President knew when he uttered those words how difficult of a challenge standing up this proposal and implementing this proposal would be."

Earnest said he didn't think Mr. Obama believed all 15,000 Syrian opposition fighters could be trained and equipped within the space of a year.

Clinton, however, remains convinced that the program could still work.

"I wouldn't give up on train and equip, but I sure would push the Pentagon to take a hard look at why what has been done has been such a failure and what more we can do to support Kurdish fighters who are on the front line," she told Dickerson Sunday.