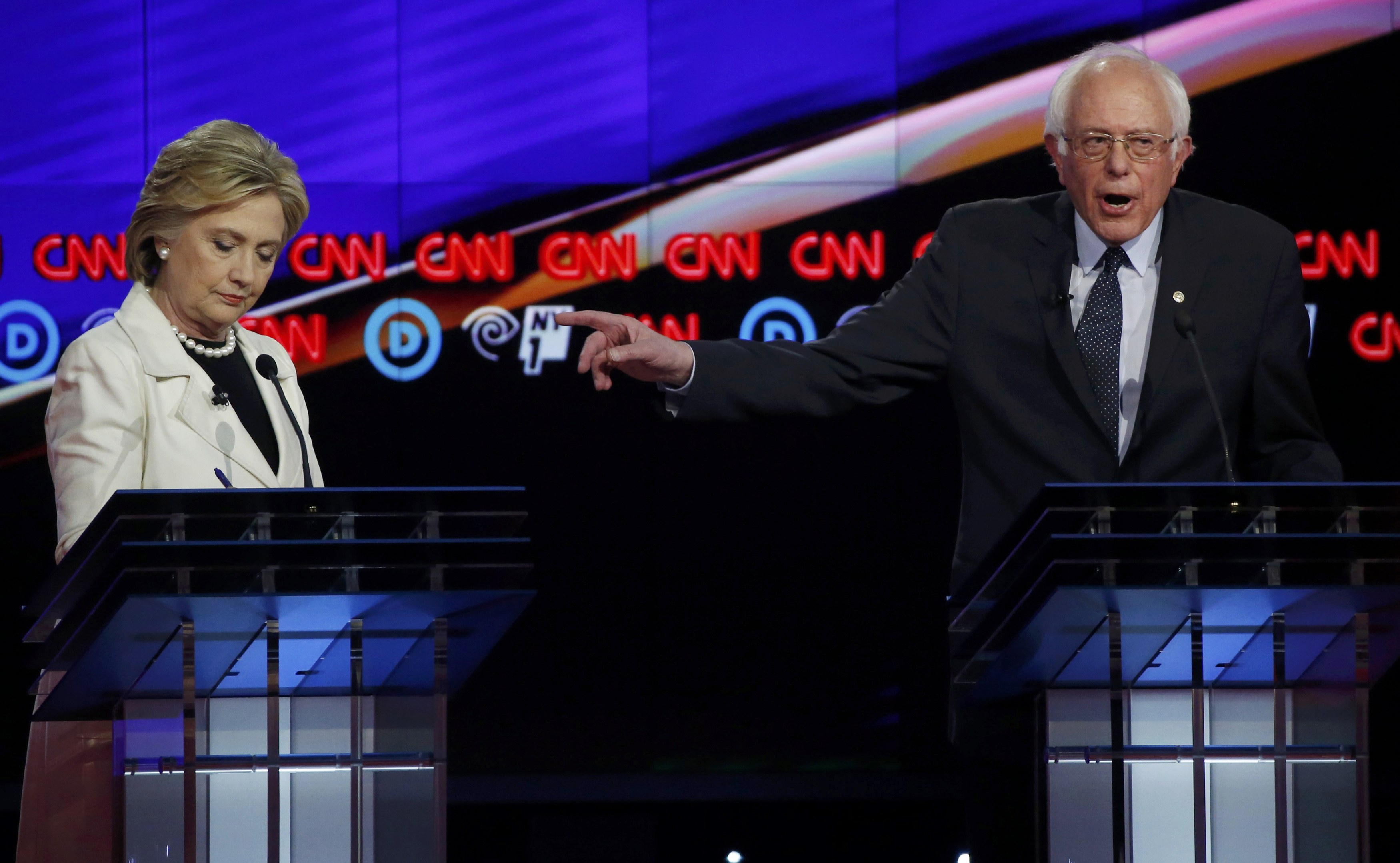 The candidates didn't get through the first hour of tonight's Democratic debate without clashing over the topic that's dominated many of the headlines in the New York primary: gun control.

Former secretary of state Hillary Clinton, asked about her previous suggestion that guns from Vermont are responsible for gun violence in New York, pivoted to familiar attack lines on Vermont Sen. Bernie Sanders over his past votes against certain gun control measures.

"No, of course not--of course not," she said when asked if she was suggesting Vermont, and by extension Sanders, are directly responsible for gun violence in New York. "This is a serious difference between us and what I want to start by saying--it's not a laughing matter."

She went on to criticize Sanders for voting against a federal assault weapons ban and voting in favor of immunity for gun manufacturers, two votes Clinton has invoked frequently throughout the Democratic primary.

"We need a president who will fight for common-sense gun safety reforms and what we have here is a big difference. Sen. Sanders voted against the Brady Bill five times," she said. "He voted for the most important NRA priority, namely, giving immunity from liability to gun makers and dealers--something that is at the root of a lot of problems we are facing."

"The only problem is, Wolf, she didn't answer your question," Sanders said to moderator Wolf Blitzer. "You asked her whether she thought that Vermont was responsible for a lot of the gun violence. And you made the point that what she said was totally absurd."

The Vermont senator noted that during his first bid for Congress in 1988, he was for a federal assault weapons ban at a time when it was unpopular.

"Here is the fact on guns, let's talk about guns: that horrible, horrible Sandy Hook--what's the word that we want to use--murder, assault, slaughter, unspeakable act. Back in 1988, I ran for the United States Congress' one seat in the state of Vermont. I probably lost that election, which I lost by three points, because I was the only candidate running who said you know what, we should ban assault weapons, not see them sold and distributed in the United States of America.

"I've got a D-minus voting record from the NRA," Sanders continued. "And in fact, and in fact, because I come from a state which has virtually no gun control, I believe that I am the best qualified candidate to bring together that consensus that is desperately needed in this country."

"Well, the facts are that most of the guns that end up committing crimes in New York come from out of state," Clinton replied. "They come from the states that don't have the kind of serious efforts to control guns we do in New York."

Clinton said Sanders may have advocated for an assault weapons ban in 1988, when he lost his bid for Congress, but that when he ran again and won in 1990, that he did it with the support of the National Rifle Association.

"Then he went to the Congress where he has been a largely very reliable supporter of the NRA, voting--he kept his word to the NRA, he voted against the Brady Bill five times because it had waiting periods in it," she said.

Blitzer asked Sanders whether he feels he owes the families of the Sandy Hook massacre an apology for his positions on the issue of gun control. He said no, he doesn't--and worked to clarify why he supported legislation that granted immunity to gun manufacturers and dealers.

"Now, I voted against this gun liability law because I was concerned that in rural areas all over this country, if a gun shop owner sells a weapon legally to somebody, and that person then goes out and kills somebody, I don't believe it is appropriate that that gun shop owner be held accountable and be sued," he said.

"But what I do believe is when gun shop owners and others knowingly are selling weapons to people who should not have them--somebody walks in, they want thousands of rounds of ammunition, or they want a whole lot of guns--yes, that gun shop owner or that gun manufacturer should be held liable."