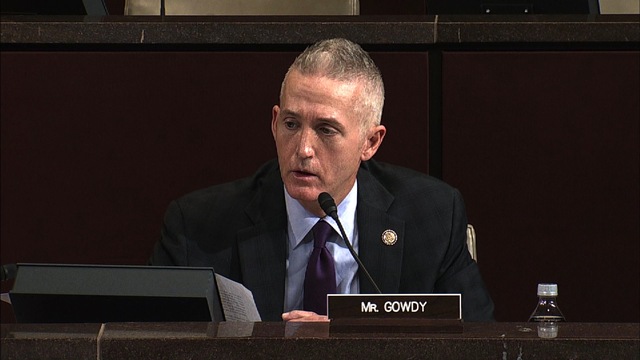 Former Secretary of State Hillary Clinton is urging the State Department to release the emails she wrote from a private account during her tenure at the head of the State Department. The special committee House Republicans created last year to investigate the 2012 attacks on a U.S. diplomatic facility in Benghazi, Libya, want those emails.

The State Department, which has served as the middleman in the email-transfer process, is now coming under fire. They received 55,000 pages of documents from Clinton in December, 900 of which - about 300 emails - they turned over to the Benghazi committee. Now, the committee has issued a subpoena for "all communications" Clinton had that were related to the Benghazi attacks. Committee chairman Rep. Trey Gowdy, R-South Carolina, complained on CBS' "Face the Nation" Sunday that there are "gaps of months and months and months" in records the committee has received from the State Department, and he no longer trusts the agency to determine what should and shouldn't be given to the committee. The subpoena was sent to Clinton's lawyer and to internet firms.

A Republican aide to the Benghazi panel told CBS News that Gowdy is especially concerned about a gap between September 2011 and Jan 5, 2012, because in spite of a request for documents from a two-year period including that time span, the State Department produced only a single perfunctory email between Clinton's chief of staff, Cheryl Mills and the chief of mission in Libya. Clinton traveled to Libya during this period, and there is an iconic photo of her on a C-17 military plane checking her Blackberry. Republicans question the fact that the State Department did not turn over even one email from Clinton herself.

Gowdy and Sen. Lindsey Graham, R-South Carolina, among others, are convinced of the need for a third party to sort through the tens of thousands of pages of Clinton's correspondence, to determine what should be part of the official record, as well as figure out whether there are any more documents to be had.

"I've lost confidence in the State Department to make that determination. They're the ones who allowed this arrangement. They're the ones who did nothing about this arrangement until they got a request from our committee," Gowdy said, referring to the fact that Clinton used only her personal email account rather than a government address while at the State Department. "We're not entitled to everything. I don't want everything. I just want everything related to Libya and Benghazi."

On NBC's "Meet the Press," Graham said, "The one thing I'll never agree to is let the State Department tell us what e-mails we should receive or let her and her team tell us. Some independent group should do that."

So who exactly could take charge of this monumental task? That could be a job for an independent arbiter - a lawyer that both Clinton and the committee agree on or perhaps a former federal judge. The arbiter could be "anybody theoretically they agreed to who is respected by both sides, will give them the right information but not give them more information" than they need, former Rep. Tom Davis, R-Virginia, who served as the chairman of the House Oversight and Government Reform Committee from 2003 to 2007, told CBS News.

It's a strategy former President Richard Nixon tried while he was under investigation for the Watergate scandal. Rather than handing over his secret recordings from inside the Oval Office to the special prosecutor's office, he proposed having Democratic Sen. John Stennis from Mississippi listen to the tapes and verify the White House summaries for the special prosecutors Archibald Cox's office.

Both sides have to agree, though. Ultimately the Cox refused the offer, and Nixon forced his firing.

One benefit to an arbiter that Davis identified is that it would take some of the edge off of a looming battle between Clinton and the committee.

"They don't want to look too political about this thing," Davis said of the committee. He said he believes Gowdy "wants to hold things together and come up with as factual a report as you can, and say this is what happened...you don't protect anybody, but you don't go after anybody in a needless way, either."

"This idea of an independent arbiter, that would be a compromise essentially," a former staff member for the House Oversight and Government Reform Committee told CBS News. If Clinton's lawyers fight the subpoena, "there could be a court proceeding...[and] the courts don't like to get involved."

Davis argued that avoiding a protracted legal battle actually helps Clinton if she does want to clear the air on the issue ahead of the 2016 run.

"Running out the clock's really not an option," Davis said. "Hillary can resist, they can go to court on this thing, it's just not really pretty for anyone involved at this point, and for her it's a complete distraction."

Even comedian Jon Stewart suggested a third party needs to take charge of the emails, likening the whole situation to Doritos revealing its ingredients on Wednesday's episode of "The Daily Show."

"I think the concern there is the aides are the ones that get to decide which e-mails are appropriate to be shared as opposed to an independent arbiter," Stewart said. "That's why Doritos doesn't get to decide which ingredients consumers need to know about or why you don't get to tell the cops which pockets to search."

The committee would still be responsible for verifying that Clinton had, in fact, handed over everything she was supposed to. Davis said that if he were running the committee, he would subpoena the private, "home-brewed" server Clinton reportedly used to run the email account. The former oversight committee staffer said that the Government Accountability Office or National Archives and Records Administration could determine whether anything had been deleted from the server.

The committee's Democrats are already pushing back against the idea of a special arbiter.

Republicans "want a so-called independent reviewer to go through all of her personal emails, and they are basically suggesting that she is lying about turning over her official documents to the State Department," a spokesman for the committee's Democrats said in a statement. "If Members of Congress have questions about the documents that have been produced or the process that was used, the appropriate steps utilized in congressional investigations are to pose those questions to an individual's attorney, ask the individual to provide a certification that all of the requested documents have been provided, and if necessary, ask the individual to confirm these facts in testimony under oath."

There is also not much precedent for an independent figure stepping into an investigation like this. Though independent arbiters are sometimes used when there are sensitive issues of privilege at hand in federal prosecutions, neither Davis nor the former oversight staffer could recall a situation when the committee resorted to that tactic for information.

Clinton may not be ready to consider an arbiter. She has yet to even say anything publicly about her emails. But least one prominent Democratic ally thinks that she has to do something soon. Sen. Dianne Feinstein said on "Meet the Press" that Clinton "needs to step up and come out and state exactly what the situation is ... I think, at this point, from this point on, the silence is going to hurt her."