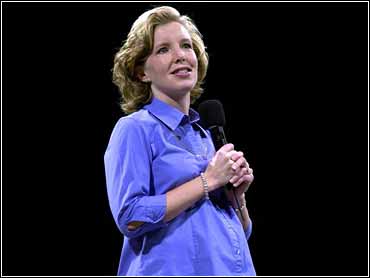 Lisa Beamer, the widow of one of the hero passengers who vowed to fight back before their hijacked plane crashed in Pennsylvania on Sept. 11, has given birth to a healthy baby girl.

The baby weighed 7 pounds and was 21 inches tall. The couple also has two sons, Drew and David.

Todd Beamer, 32, was one of several passengers aboard United Flight 93 who made phone calls to relatives or authorities, alerting them that a hijacking was taking place and making plans to fight back.

Beamer ended his conversation with a GTE operator by dropping his phone and saying, "Let's roll." A short time later, the plane crashed into a field in Shanksville, Pa., killing all 44 on board.

It was the only hijacked plane that day that didn't take lives on the ground. Authorities have said it was headed toward Washington, D.C.

Flight 93 was scheduled to fly from Newark to San Francisco.

The foundation's Web site asks that in lieu of baby gifts, those wanting to can make a donation to either the foundation or to a children's charity in the baby's honor.