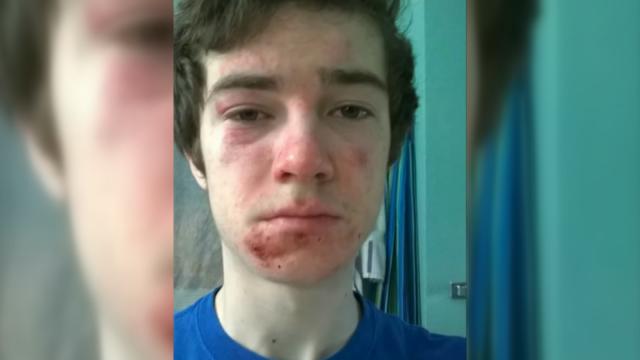 TULSA, Okla. -- A pep rally gone wrong left a high school student in Tulsa, dressed as a mascot from the opposing team, bloody and bruised with injuries that sent him to the hospital.

CBS affiliate KOTV reports that Tulsa Public Schools said it's investigating after an incident during a pep rally where a football player kicked Austin Rand, a senior at Memorial High School, in the face.

Now Rand is wondering why his fellow student took the pep rally way too far.

KOTV explains Rand was involved in what was meant to be a pep rally skit. He was playing the rival mascot, the Edison Eagle. But the skit got out of hand when dozens of football players tackled him.

They piled on Rand, who said at the bottom of the pile, one student got particularly aggressive. He repeatedly kicked Rand in the face.

"I cried. I cried really hard... I think he really wanted to do it, and then that happens," said junior Nygia Smith to KOTV. "They were on him for a really long time, and it just didn't look right. And then he got up and you could just see the look on his face. His face was red."

School officials tell KOTV they have already taken disciplinary action against the football player accused of kicking Rand in the face. But added the player was not eligible for the football team this season. They have not released his name.

The district is also requiring the players to make a public apology to their school during an assembly this Friday. In addition, senior football players will sit out during the first half of Friday's game. And the entire team is required to perform 12 hours of community service at their school.

"We have to have no tolerance for this kind of behavior," said Tulsa Public Schools spokesman Chris Payne. "It just really got way out of hand."

Rand said he doesn't believe the football team is at fault. He said many players have already apologized to him.

And Rand tells KOTV that he is feeling better, but is still in pain.