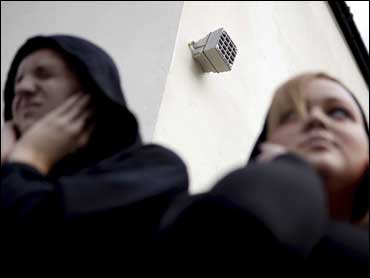 As 15-year-old Eddie Holder sprinted from his apartment for school one recent morning, he held his hand to one ear to block out a shrill, piercing noise.

The sound was coming from a wall-mounted box, but not everyone can hear it. The device, called the Mosquito, is audible only to teens and young adults and was installed outside the building to drive away loiterers.

The gadget made its debut in the United States last year after infuriating civil liberties groups when it was first sold overseas. Already, almost 1,000 units have been sold in the U.S. and Canada, according to Daniel Santell, the North America importer of the device under the company name Kids Be Gone.

To Eddie, it's tormenting.

"It's horrible, loud and irritating," he said. "I have to hurry out of the building because it's so annoying. It's this screeching sound that you have to get away from, or it will drive you crazy."

The high-frequency sound has been likened to fingernails dragged across a chalkboard or a pesky mosquito buzzing in your ear. It can be heard by most people in their teens and early 20s who still have sensitive hair cells in their inner ears. Whether you can hear the noise depends on how much your hearing has deteriorated - how loud you blast your iPod, for example, could potentially affect your ability to detect it.

Civil liberties groups in England, Australia and Scotland have expressed outrage over the device, and England's government-appointed Children's Commission proposed a ban. They describe it as a weapon that infringes on the basic rights of young people, and claim it could even have unknown long-term health effects.

The $1,500 device has also been challenged in some American cities and towns that have proposed installing it, with some criticizing the tactic as needlessly cruel.

Santell said the noise can be heard by animals and babies, but is bothersome only to children older than 12 and becomes unbearable after several minutes, making it a perfect teen-repellent. The same sound is also used as a cell phone ring tone meant to fall on the deaf ears of adults, and is a popular download on the Internet.

The town of Great Barrington, Mass., banned the device last year after a movie theater owner installed one.

"There was an outcry, and people didn't like the idea of torturing kids' ears like that," said Ronald Dlugosz, a town official. "People here don't tolerate that kind of stuff."

Milford, Conn. faced similar resistance when the city announced plans to install the Mosquito in a park. They increased police patrols instead.

Elsewhere, there have been few or no complaints. A mall in Calvert County, Md., announced plans to introduce the buzz to disperse skateboarders, and officials and police said they haven't had any outcry. A school district in Columbia, S.C. recently installed one on the front grill of a school vehicle and another in a parking lot where students gather after high school games, with no complaints.

"We'd have crowds gather in parking lots and there'd be the usual trash talk, then you'd have fights," said Rick McGee, the school district's emergency services manager. "Now there's no confrontation at all, they just get aggravated and leave within a few minutes."

Santell, the device's marketer, said most of the company's inquiries are from major corporations and government agencies looking for a way to protect private property. Overseas, complaints arose when the device was projected into public spaces, like sidewalks.

Santell said it does not violate any noise ordinances, but added that the company will soon be selling the same product with a higher "power," or decibel output, that will only be sold to government agencies.

Carmen Ramirez, superintendent of the Queens apartment building where Eddie lives that recently installed the Mosquito, described it as "a miracle."

"We used to have young men here all of the time, bothering people in the building and doing illegal things," said Ramirez, 50. "As soon as we put it up, they were gone and they haven't been back. If they return, we'll just put up more."

A spokesman for the American Civil Liberties Union said the organization does not yet have a position on the issue. But James Alan Fox, a criminologist at Northeastern University, said crowd-monitoring devices in the hands of private businesses and citizens is "dangerous."

"There is a significant problem with giving people a tool like this and empowering the public to take over the tasks of law enforcement," Fox said. "It can certainly be used in a way that's inappropriate, and without a doubt it will be."

Nobody at the Queens apartment building could say where the loitering kids had gone after the Mosquito was installed.

"I just deal with it, but I can't be around here for too long," Eddie Holder said. "If I am going to stand around somewhere, it won't be here."