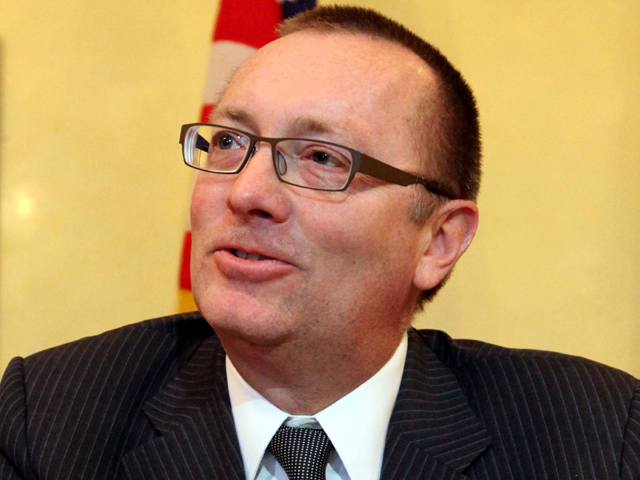 BENGHAZI, Libya - The highest-ranking U.S. diplomat in the Middle East was in the de facto rebel capital in eastern Libya Monday - a show of growing support for the loosely formed movement that seeks to oust longtime ruler Muammar Qaddafi.

A State Department statement called the visit by Jeffrey Feltman, Assistant Secretary of State for Near Eastern Affairs, "another signal of the U.S.'s support" for the rebels' National Transitional Council, which it called "a legitimate and credible interlocutor for the Libyan people."

Countries including France, Italy and Qatar have officially recognized the NTC, while the United States, Britain and others have established a diplomatic presence in Benghazi. Germany has also opened an office in Benghazi, the German government said Monday.

Libya's rebels have scrambled to organize their fighters and create a political leadership since the outbreak in mid-February of the uprising that seeks to oust Qaddafi, in power for more than four decades. Rebels now control the populated coastal strip in the country's east and the western port city of Misrata, which Qaddafi's forces have besieged for months. They also control pockets in Libya's western Nafusa mountain range.

During his three-day visit, Feltman will meet with council head Mustafa Abdul-Jalil and others. Feltman departs Tuesday. He declined to answer questions by a reporter from The Associated Press Monday.

The visit follows the opening of a European Union office on Sunday by that body's top diplomat, Catherine Ashton, who said she looked forward to a better Libya "where Qaddafi will not be in the picture."

Rebel leaders welcome the diplomatic contact, but say only better weapons will help them defeat Qaddafi.

"It is just not enough to recognize (us) and visit the liberated areas," spokesman Abdel-Hafidh Ghoga told The Associated Press. "We have tried very hard to explain to them that we need the arms, we need funding, to be able to bring this to a successful conclusion at the earliest possible time and with the fewest humanitarian costs possible."

Ghoga said the country faces a "major humanitarian disaster" in its western Nafusa mountains, where residents say government troops have been cutting supply lines to communities.

"They are more or less boiling the leaves of trees" to survive, Ghoga said.

Qaddafi's forces fired rockets at the mountain town of Zintan Monday, damaging houses and the tanker trucks residents use to bring in water, resident Hamid Embayah told the AP via Skype. No one was injured.

A resident of Galaa village said conditions there continue to worsen since government forces destroyed a main road last week. The mountain community has no fresh fruit or vegetables and is running low on other supplies, the resident said by phone, speaking on condition of anonymity for fear Qaddafi loyalists would target him.

Government forces about six miles away frequently hit the town with rockets and tank fire, he said, though no residents have been killed in recent days.

Villagers raise goats and sheep and grow apricots and almonds on the plain near their town, he said. Many fear Qaddafi's troops have destroyed their orchards and stolen or killed their animals.

Also Monday, a boat chartered by the International Organization for Migration was sailing toward Benghazi with almost 600 migrants and a number of wounded civilians evacuated from the besieged city of Misrata.

The trip, the group's seventh, brings the number of migrants it has evacuated to nearly 7,000 since the fighting began.

The TAP agency didn't specify the reason for al-Obeidi's visit, his fourth official trip to Tunisia. The first in late March came as the deputy under then-minister Moussa Koussa, who later defected.