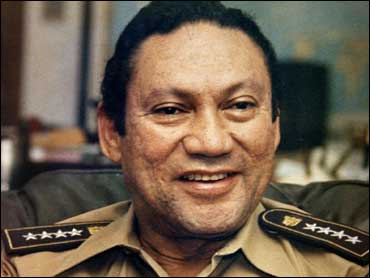 The Supreme Court on Monday decided not to stop the U.S. government from sending former Panamanian dictator Manuel Noriega to France to face money laundering charges.

The high court refused to hear an appeal from Noriega, who wanted to be sent back to his native country after finishing his drug sentence in the United States.

The court's majority turned away Noriega's appeal without comment. Justice Clarence Thomas and Antonin Scalia said they would have heard the appeal, however, to help decide what the law is for prisoners of war being held by the United States.

"Providing that guidance in this case would allow us to say what the law is without the unnecessary delay and other complications that could burden a decision on these questions in Guantanamo or other detainee litigation arising out of the conflict with al Qaeda," Thomas said in his dissent.

Noriega is the only person currently being detained by the United States as a prisoner of war, government officials said.

Noriega was ousted as Panama's leader and brought to Miami to stand trial following a 1989 U.S. invasion that drove him from power. He was convicted of drug racketeering and related charges in 1992 and declared a prisoner of war by U.S. District Judge William Hoeveler.

That drug sentence ended on Sept. 9, 2007, but Noriega remains at the same Miami prison where he served his drug sentence.

A few weeks before his sentence ended, the U.S. filed papers backing France's request that Noriega be extradited to stand trial on drug money-laundering charges there. Noriega was convicted in absentia of laundering some $3 million in drug proceeds, but France has agreed to give him a new trial.

Federal judges have turned away Noriega's claims that the Geneva Conventions treaties regarding prisoners of war require him to be returned to Panama.

Noriega's argument focused on the Geneva Conventions treaties regarding repatriation of POWs after wars end. Noriega's attorneys argued that the 11th U.S. Circuit Court of Appeals and lower courts were wrong in ruling that Noriega could not use the treaties to block extradition to a third country such as France.

Noriega's attorney, Frank Rubino, said the final decision on France's extradition request now rests with Secretary of State Hillary Clinton. "There's no doubt in my mind they will send him" to France, Rubino said.

Rubino said the decision could set a dangerous precedent in which U.S. soldiers who are captured overseas face continual trials rather than being returned home when hostilities end. "We've sealed the fate of American soldiers by this decision," Rubino said.

The government of Panama also has an extradition request for Noriega, but officials there decided to allow France to go first, Rubino added.

"They don't want him back in Panama. They are afraid of him. I don't know why, because all he wants to do is sit back on his rocking chair and enjoy his grandchildren," he said.