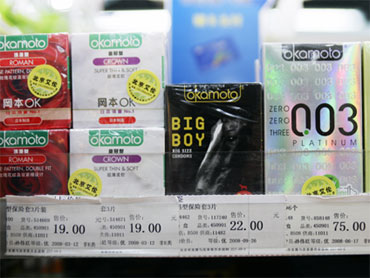 The virus that causes AIDS is now spreading fastest in China through heterosexual sex, a trend demanding new strategies to stave off a rebound in the epidemic after years of progress in containing it, a United Nations report said.

Data show that 40 per cent of new HIV infections diagnosed in China were acquired through heterosexual contact, with homosexual sex accounting for 32 per cent and most of the remainder related to drug abuse, which was previously the main source of infections and the government's main focus for prevention.

"We are transitioning. We are seeing a shift in the nature of the epidemic," said Michel Sidibe, executive director for UNAIDS.

Similar trends in Asia and Africa highlight the need to focus on populations most at risk, such as migrants and sex workers, he said.

"We need to ensure resource allocation is responding to that change," Sidibe said.

The government remains sensitive about the disease, regularly cracking down on activists and patients who seek more support and rights.

In Beijing on Wednesday, a group of more than 30 AIDS patients from Henan province were detained shortly after protesting for compensation outside the Health Ministry building, according to their legal adviser, Jiang Tianyong.

Most of the patients were infected with HIV/AIDS through blood transfusions at hospitals in Henan, according to one of the protesters surnamed Gao, who tested positive in 2007, after her husband died from AIDS.

"We've petitioned the local government, but they've ignored us, so we have nowhere left to go," said Gao, who has already traveled to Beijing twice this year to petition for additional compensation.

"Our local hospital in Kaifeng does not have the adequate experts and medication to treat patients like us. We need specialized care, which is why we have to turn to the central government for help."

Gao, whose husband unknowingly contracted HIV after selling his blood in 1993, traveled eight hours by train to Beijing to petition for compensation.

Officials from the ministry and police officers detained the group of more than 30 protesters, including four children with HIV/AIDS, according to Gao.

As a single mother, Gao said her unemployment benefits add up to only $90 a month. That is not enough to cover schooling costs for her 12-year-old son and rent, since her house was sold to pay hospital costs for her husband's treatment. 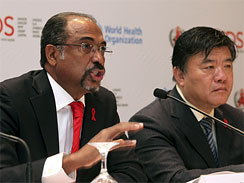 (AP Photo/Eugene Hoshiko)
China's health minister, Chen Zhu (left, with UNAIDS Executive Director Michel Sidibe), reported that as of the end of October, the number of Chinese confirmed to be living with HIV-AIDS was 319,877, up from 264,302 last year and 135,630 reported in 2005. But Chen said the actual level of infections is probably near 740,000.

AIDS was the top killer among infectious diseases in China for the first time last year, a fact that may reflect improved reporting of HIV/AIDS statistics in recent years as the country slowly acknowledges the problem.

"In China, we have a long way to go to prevent and control HIV-AIDS," Chen said, while defending the government's policies toward the disease as "open and transparent."

The HIV virus that causes AIDS gained a foothold in China largely due to unsanitary blood plasma-buying schemes and tainted transfusions in hospitals. But last year, health authorities said sex had overtaken drug abuse as the main cause of HIV infections.

HIV's spread has been accelerated by China's thriving sex industry: about 37 million men are estimated to be clients of female sex workers, and surveys show that 60 per cent do not regularly use condoms, the UNAIDS report said.

Such factors contributed to a doubling in women's share of HIV cases in China in the past decade, it said.

China's policy of tolerating the sex industry while outlawing it has long prevented effective efforts to promote education and testing among sex workers, though Chen said the government intends to improve education and prevention.

• Since the beginning of the epidemic, almost 60 million people have been infected with HIV and 25 million people have died of HIV-related causes.
• In 2008, between 31.1 million and 35.8 million people worldwide are living with HIV, with between 2.4 million and 3 million newly infected. There were between 1.7 million and 2.4 million AIDS-related deaths.
• Sub-Saharan Africa is the region most affected; it is home to 67% of all people living with HIV worldwide, and 91% of all new infections among children.
• In sub-Saharan Africa the epidemic has orphaned more than 14 million children.

HIV prevention
• Worldwide, new HIV infections have been reduced by 17% over the past eight years.
• The percentage of HIV-positive pregnant women who received treatment to prevent transmission of the virus to their child increased, from 33% in 2007 to 45% in 2008.
• Fewer than 40% of young people have basic information about HIV, and less than 40% of people living with HIV know their status.
• The number of new HIV infections continues to outstrip the numbers on treatment - for every two people starting treatment, a further five become infected with the virus.

HIV treatment
• Despite considerable progress, global coverage of Antiretroviral therapy (ART) treatment remains low: in 2008, only 42% of those in need of treatment had access (compared with 35% in 2007).