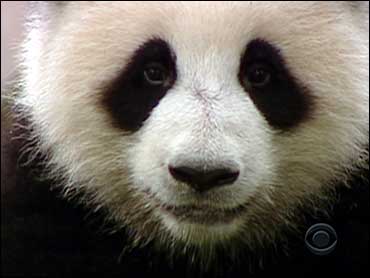 Pandas just seem made to make us smile.

And that's why even the smallest of fans celebrated the new pandas at the Beijing Zoo, CBS News correspondent Barry Petersen reports.

But why the pandas are here is no laughing matter - some are refugees.

From the earthquake which devastated southern china, home to one of China's main panda research centers, had five workers killed, and terrified pandas had to be rescued as buildings collapsed.

"The earthquake caused our pandas incredible psychological stress," said Wang Peng Yan, assistant director of the Wolong National Natural Reserve, through a translator. "They clutch you tightly to get a sense of safety."

So handlers pet and talk to them to ease their fear. But it could take months for them to recover, and human help is only available to the some 200 pandas living in captivity.

By some estimates, there are as many as 1,600 pandas still in the wild, and no one knows how they are doing. Their bamboo forest, their water supply, could all be destroyed. One Chinese official said as many as 90 percent could be in danger.

Much of the pandas' habitat was wiped out as movie producer, Jennifer Liu and her crew witnessed. They were out while filming the day the earthquake hit.

"Before we knew it, the earth shook from underneath our feet and we saw mountains come down on both sides of us," Liu said.

Her movie is about an orphan boy helping a panda, and while filming she learned a lot about a panda's personality.

China has spent millions learning how to breed pandas in research centers.

Hard-earned knowledge that will now be crucial in replacing any pandas killed in the wild, making sure we will never be without these furry creatures … who make us smile.