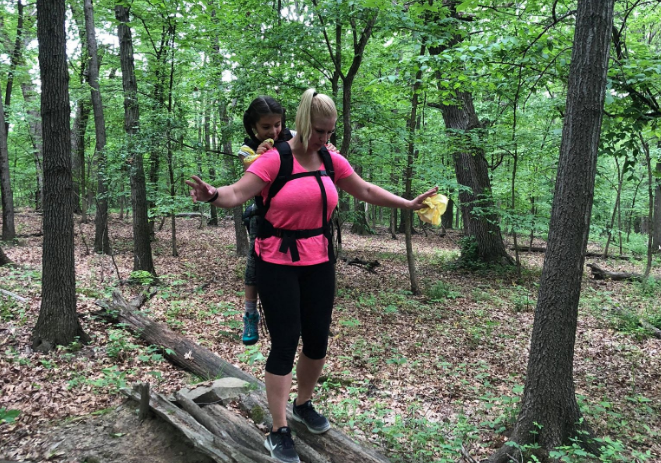 One teacher in Illinois went above and beyond to bring one of her 4th grade students with cerebral palsy to a two-day hiking trip. Helma Wardenaar, or "Ms. Helma" as her students call her, was so determined to bring 10-year-old Maggie Vazquez to a camp with her peers that she carried the child herself.

For months, Wardenaar and other school administrators were trying to figure out a solution to accommodate Maggie so she could go to Camp Sullivan, camping grounds located about 40 miles from their Chicago charter school, Academy of Global Citizenship.  But, it was never about if she was going to go, but how.

"There was no question she needs to come with us," Wardenaar told CBS News. The question then became: "So how are we going to do this?"

A flurry of ideas were considered. A wheelchair. A barrel. Renting a pony.

"I inquired with a friend who had a pony, but the forest preserve didn't let us because ponies are only allowed on the horse path," Wardenaar said.

At one point, Wardenaar wanted to bring Maggie on a horse anyway and face a fine, but later admitted "that wouldn't be a good example if I purposely broke the law."

She took her quest to Facebook, where she solicited advice from her friends. She eventually found a lead with an employee named Greg at Recreational Equipment inc., an outdoor gear company.

Greg couldn't find a carrier big enough for Maggie at first. However, two weeks later, he contacted Wardenaar and found an item called the Freeloader that would be more suitable for Maggie since it tailors to taller children.

Then from May 30 to June 1, about 50 fourth grade students and 10 school personnel embarked on the school trip.

"We saw birds, frogs and deer," Wardenaar said. "We were able to do everything her peers were doing, she was one of us."

Carrying Maggie through the outdoors was no easy task, according to Wardenaar. Still, Maggie made it all worth it.

"There were moments where it was pretty hard," she said. "Maggie was amazing. She sang her own song. When you have a child who is enjoying the moment and being with her peers, those were moments that I was able to push through."

Maggie's mother, Michelle Vazquez, raved about Wardenaar, who has known her daughter since the first grade.

"It's been amazing, right off the bat, she met Maggie and got involved," Vazquez said. "She has always been advocating for her. It's not just with the camping trip that's just one little piece. There's a lot of things she does."

Vazquez said Wardenar went "way above and beyond" for Maggie on the recent camping trip.

"Because of her challenges, she doesn't get those opportunities," she said. "To be out in nature, to experience was pretty amazing for her."

"She's the epitome of relentless determination," Ippel said. "Helma is always someone who goes the extra mile."