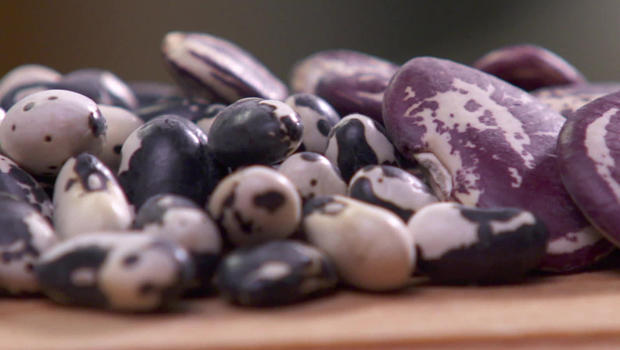 Up the road from Napa Valley's world famous wine vineyards, you'll find an old chapel, now a home, whose sole inhabitant is preaching about a different kind of crop.

"This one is actually from Oaxaca," he explained. "They turned into this beautiful purple-like, gun-metal color almost."

And, he said, you can't find his dried bespeckled gems in your local grocery store.

"There are commodity beans, which actually serve a great purpose," he said. "They really feed a lot of people easily and cheaply, and they provide protein. But heirloom beans are ones that have been saved for generations, and they're saved because they taste like something."

Correspondent Jonathan Vigliotti asked, "Where do you find them?"

"Well, that, I can't tell you!" Sando laughed. "We've spent years and years developing relationships with growers and farmers and collectors."

Sando's menu of more than three dozen bean varieties includes everything from heritage pintos to his rare "eye of the goat," with flavors ranging from chocolate to coffee. The creamy texture, like butter!

"A bowl of heirlooms, maybe with a squeeze of lime, a little chopped onion, I mean, there's kinda nothing better," Sando said.

The key to unlocking the flavor? First, a rapid 10-minute boil: "That first ten minutes, you're letting the beans know, 'I love you, but I'm in charge."

Second, a simmer, with some inexact science: "I actually don't focus on the time too much, but one of my favorite things to do on a Sunday is to put on the classic Bette Davis movie, 'All About Eve,' and at one point, she's gonna say, 'Fasten your seat belt. It's gonna be a bumpy night.' And that's at the point I add the salt.

"And then, later in the movie, she says, 'It's a funny business, a woman's career,' and that's, like, 'Oh, we should start testing them. They might be done.'"

Bette Davis has spoken – the beans are done!

Vigliotti said, "The magic here is how simple it is."

Sando's obsession with quality heirloom beans first started in 2000: "I turned 40, and I wasn't sure what I was going to do with my life. So, I started growing heirloom vegetables."

"So, most people going through a mid-life crisis get a fancy car – you picked up a shovel?" laughed Vigliotti.

"Yeah! But I intuitively knew, if I had a garden, I'm gonna be okay."

And he was OK, once Napa Valley's famed restaurants, like the French Laundry, discovered his crop, putting his beans on their menus, and Sando on the map. "It was like seagulls on fish in the ocean or something!"

"We're in wine country. Wine is sexy," said Vigliotti. "Beans? Are they sexy?"

"Oh, they are," Sando replied. "Someone even said, 'You made beans sexy.' I'll take that!"

With the uptick in sales, Sando did what any Napa business owner does – he started an exclusive mailing club. It's 11,000 members strong, with another 11,000 on the waiting list to get in.

Penny Garcia, of San Antonio, Texas, is a member. "I always tell my husband I will never, ever give up my spot in Rancho Gordo Bean Club!" she laughed.

Sando and his beans are now surely Napa staples.

Vigliotti asked, "Is it fair to say some of the people in the wine club are a little jealous of the bean club?"

"Oh, sure," Sando replied. "I mean, 11,000 members in a wine club? Most wine clubs would be very happy, really happy for that! I think the lesson is, if the big boys don't let you into their club, make your own club, but do it to make yourself happy."