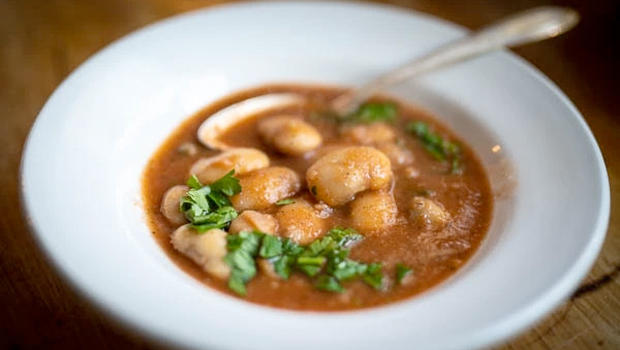 Steve Sando, of Rancho Gordo, is offering "Sunday Morning" viewers some of his favorite bean recipes, as well as tips on how best to prepare them below:

There is not one single method of cooking beans. At its most basic, you want to simmer the pot until the beans are soft. Soaking can speed up the process, and vegetables or stock will make them more flavorful. It's really that simple. There's all kinds of fine tuning and variables, but basically, this is it.

Normally on a bean cooking day (which frankly is everyday at Rancho Gordo), I put the beans to soak in the morning, after rinsing in lots of cool water and checking for small debris. I cover the beans by about an inch or so of water. If you haven't soaked, don't fret. Go ahead and cook them, knowing it will take a bit longer.

Heirloom and heritage varieties don't need a lot of fussing if they are used fresh, which I'd define as within two years. You can use a ham bone, chicken stock, or as I prefer, simply a few savory vegetables. A classic mirepoix is a mix of onion, celery and carrot diced fine and sautéed in some kind of fat, often olive oil. A crushed clove of garlic doesn't hurt. If I'm cooking Mexican or Southwestern, I will sauté just onion and garlic in mild bacon drippings or even freshly rendered lard.

Add the beans and their soaking water to a large pot. You have been told before to change the water and rinse the beans. The thinking now is that vitamins and flavor can leech out of the beans into the soaking water you are throwing down the sink. There is conflicting scientific evidence that changing the water cuts down on the gas. If you want to, do it. If it seems unnecessary, don't.

If you've soaked them, the beans will have expanded, so make sure they are covered by at least two inches of water, maybe even a bit more. Add the sautéed vegetables and give a good stir. Raise your heat to medium-high and bring to a hard boil. Keep the beans at a boil for about ten to fifteen minutes. After so many years, I think this is the moment that really matters. You have to give them a good hard boil to let them know you're the boss and then reduce them to a gentle simmer, before covering. I like to see how low I can go and still get the occasional simmering bubble. Open and close the lid, or keep it ajar to help control the heat and allow evaporation. The bean broth will be superior if it's had a chance to breathe and evaporate a little.

When the beans are almost ready, the aroma will be heady. They won't smell so much like the vegetables you've cooked but the beans themselves. At this point, I'd go ahead and salt them. Go easy as it takes awhile for the beans to absorb the salt. If you want to add tomatoes or acids like lime or vinegar, wait until the beans are cooked through.

If the bean-cooking water starts to get low, always add hot water from a tea kettle. Many believe that cold water added to cooking beans will harden them. At the very least, it will make the cooking take that much longer to bring them back to a simmer. We don't recommend using hot tap water, straight from a water heater. Better to heat the tap water in a tea kettle or pan first.

So you're done! Once you've mastered this method, go ahead and try some different techniques. Your bean friends will swear by this or that method and you should take their advice, keeping in mind there are few absolutes when it comes to cooking beans, only that it's very hard work to mess up a pot of beans.

Cooking beans in a crockpot

Sauté half of a chopped onion in about one tablespoon of fat (oil, lard, bacon fat, etc.). Place in a crockpot along with any other aromatics you'd like (such as Mexican oregano, garlic, bay leaf), followed by beans that have been picked over and rinsed. Cover with plenty of water (about one part beans to three or four parts water). Turn the heat to "high" and give the contents a stir. Do this in the morning, and your beans should be done by the afternoon. Cooking time will be 4-6 hours, depending on your crockpot and the variety of beans.

Cooking beans in a pressure cooker

First consult the manufacturer's instructions for the exact method for your model. Place cleaned beans in the pressure cooker and cover with three or four parts water. Generally, you want to cook under pressure for 20 minutes, release, and then cook open on the stovetop for another 20 minutes.

Some handy cooking and storing tips: