Back in the 1960s, Hugh Hefner's TV show, "Playboy After Dark," took the form of fun-filled party . . . a party that apparently has NEVER stopped. Bill Whitaker now with a Sunday Profile:

We all know Hugh Hefner: Playboy ... Hedonist ... Bon Vivant ... a party animal still running wild at age 84, living large at his storied L.A. playground, the famous (or, depending on your point of view, infamous) Playboy Mansion.

"It's my home, yes. Wouldn't want to live anywhere else," he said. "It's Shangri-La. And like the original Shangri-La, the rumor is you don't get old here."

There could be something to that, because Hugh Hefner is hot!

His trademark Playboy Clubs, whose cotton-tailed bunnies first hopped into pop culture 50 years ago and once served the hippest crowd in town, are bouncing back after decades of decline, with a new club in Vegas, and others planned for Miami, London, Mexico and Macau.

"Yes, the bunny is back, and you know how bunnies are: They do proliferate," Hefner said.

"You are, like, hip and happening again," said Whitaker.

And what a sight: A worldwide empire that exploded from Hefner's fertile imagination, deepest desires and $1,000 from his mother.

Playboy Magazine hit the stands in 1953 with a voluptuous Marilyn Monroe wearing nothing but a come-hither look. Eisenhower's America was shocked, and titillated, and changed forever.

"We were there to ignite the flame that became the sexual revolution," Hefner told Whitaker. "I take some pride in that."

"People must have thought you were lewd and lascivious and a corrupter of young morals," Whitaker said.

"Some did, and some seem to still think so today," Hefner said. 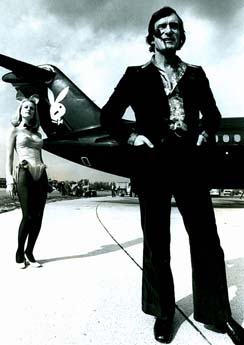 (Playboy)
The magazine and that oh-so-well-cultivated lifestyle made him the envy of many a man ...

(Left: Hefner with the Playboy jet, and an iconic Playboy Bunny.)

Now, is it hard to keep that image going?

"Actually, it's very easy," Hefner said. "I don't have to put on a tie. My getting dressed is putting on my pajamas."

But it's also made him the enemy of many men, and more women. The criticisms? He's heard them all: You're not celebrating women, you're degrading women . . . It's not for joy of sex, it's sexist.

"The very nature of Playboy and my life, I think I touched very close to the heart of things that are controversial in America - you know, sex and wealth and success," said Hefner. "And throwing a good party."

She says the playboy still loves to shock with the pajamas and the parties ...

"And the women! An amazing number of women," said Berman. "And women love him and he loves women."

"He has had a constant, running battle with feminists. Don't they have a point?" asked Whitaker.

"Absolutely, they have a point. Absolutely!" said Berman.

Beneath those pajamas beats the heart of a rebel, an iconoclast who's been tearing down barriers for decades.

At a time when America was black and white, Hefner's earliest TV shows (such as "Playboy's Penthouse") brought the races together, casually and comfortably, as if to say, Doesn't everyone live like this?

In the '60s when Playboy franchises in Miami and New Orleans refused to admit black patrons, Hefner bought back the licenses to those clubs at a loss, said Berman, "and then had whoever - black, white, doesn't matter - everyone was welcome."

"We know about the sexual revolution," Hefner said. "People are less aware of the part I played related to racial equality, gay rights, the changing of drug laws. We were the amicus curiae, friend of the court in Roe v Wade. It gave women the right to choose.

"All these big issues, he was there, and I believe in those many rivulets, is how he made a difference," said Berman. "All these little things make up the total of who this man is."

All these little things that Hefner has been keeping all his life. Artifacts and mementoes from his earliest years to the present, meticulously filed away in 2,323 leather-bound scrapbooks: Pictures of his first plane . . . his first Valentine to his mother. 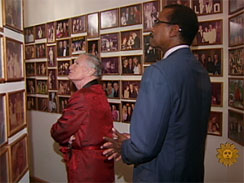 (CBS)
If it's not in his scrapbooks, it's on his walls: Pictures of everyone who's partied at the Mansion. "Everybody, everybody comes to the Playboy Mansion," he said. Clooney. Nicholson. Beatty.

There's a whiff of nostalgia about the old mansion.

Any regrets? "Oh, a few, sure," Hefner said. "I wouldn't have taken the company public. It served no purpose."

The Playboy brand might be hot again, but the flagship magazine is flagging - monthly circulation down from the giddy heights of more than 7 million 40 years ago to about a million & a half now.

"I do oversee what goes into the magazine: Pick the covers, pick the playmates, cartoons, jokes, letters. Still actively involved."

The twice-married, twice-divorced octogenarian is an unabashed proponent of Viagra.

"Couldn't have had seven girlfriends without Viagra," he said. "I don't want to create the false impression that I am partying on the same level that I did back in the 1970s - had multiple girlfriends for a period of time, but I met a very good one-on-one relationship right now with Crystal Harris. I'm very happy."

Crystal Harris, Playmate of the Month in December, lives with Hef at the mansion with his menagerie and his memories.

Which is the Hefner he likes you to see.

"I'd like to be remembered as someone who played an important part in changing the social-sexual values of my time," he said.

Love him or hate him ... filmmaker Brigitte Berman says he cannot be ignored.

"You can never say he has not made a difference and he is not an amazing icon," she said.

America is different because of Hugh Hefner. To which he'd say, viva la difference.

"The whole concept that somehow Playboy turned women into sex objects - that's part of who they are! Thank goodness! It is the attraction between the two sexes that gives us civilization."

"Hm-hmm. Dancing as fast as I can," Hefner replied.