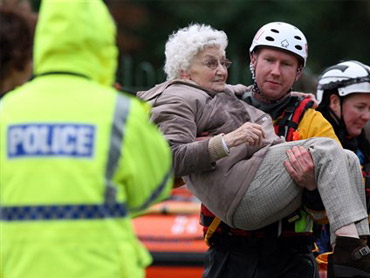 British soldiers conducted house-to-house searches for those trapped by floods as deep as 8 feet (2.5 metres). Troops also dropped down on lines from Royal Air Force helicopters, breaking through rooftops to pluck people to safety.

Constable Bill Barker, 44, died as he joined rescue attempts, swept into the surging waters when a major bridge collapsed. Emergency services said more than 200 people were rescued in the hardest-hit town, Cockermouth and about 1,000 homes were flooded.

"It has devastated the town," said Michael Dunn, manager of the Bitter End pub in Cockermouth. "There is a lot of properties in Main Street, private shops, that have had their windows smashed in by the force of the water and by debris in the water.

"There were cars floating down the street. It will be a long time before Cockermouth recovers from this."

The rain stopped and floodwaters began to ease early Friday, giving rescuers a chance to reach trapped people by boat. Debris swirled around the boats as they pulled people to safety.

Tony Walker, whose house faces Cockermouth's main street, told BBC radio that he was on the top floor and the water on the ground floor was chest high.

"I've had better mornings," Walker said. "I've been here all night and I've run out of water now, so I'm thinking of making a break for it, really. The water is still pretty deep, it's going down, but at this rate it's going to be hours before it's clear."

Forecasters said the rainfall was unprecedented. The Environment Agency recorded 12.3 inches of rain in 24 hours in one spot - one of the wettest days ever recorded in England.

"It looks like a very historical event," said Julian Mayes, a forecaster with MeteoGroup UK.

Environment Secretary Hilary Benn told the BBC that flood defences were meant to withstand a one-in-100-years flood - but could not cope with the volume of water.

"What we dealt with last night was probably more like one-in-a-1,000, so even the very best defenses, if you have such quantities of rain in such a short space of time, can be over-topped," Benn said.

In a message to local officials, Queen Elizabeth II said she was "deeply concerned and saddened by the dreadful flooding across Britain." British Prime Minister Gordon Brown said Barker "was a very heroic, very brave man."

Britain's Met Office said a record 12.3 inches (314.4 millimeter) of rain fell in 24 hours in the area — the heaviest rainfall ever recorded in the U.K.

Cockermouth, a market town 330 miles (530 kilometres) northwest of London, lies at the junction of the Cocker and Derwent rivers and is known as the birthplace of poet William Wordsworth. The flood was "of biblical proportions," local House of Commons lawmaker Tony Cunningham said.

Heavy rain and gales also brought widespread flooding to Ireland, as more than 3 feet (1 metre) of water shut down the centre of the country's second-largest city, Cork, and more than a dozen towns and villages. The Irish army was used to rescue the stranded from waist-deep floodwaters and a helicopter winched to safety a County Galway family of five, including the 87-year-old grandmother.

Floods caused transport chaos along Ireland's western coast. At the Lake Hotel, on the shores of the fabled Killarney Lakes in County Kerry, about 170 guests at the Victorian period building were evacuated by tractor, as staff carried period furniture upstairs.