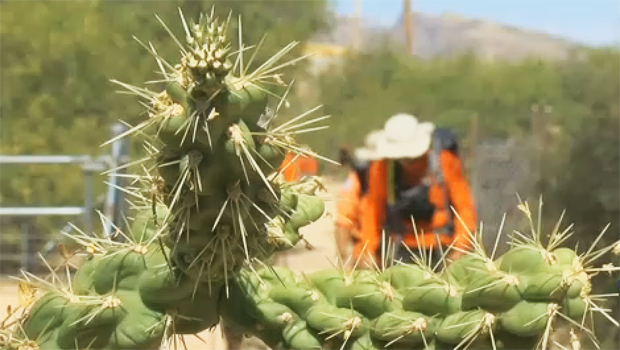 The first day of summer will be a scorcher for more than 30 million Americans in the Southwest, where temperatures today could reach up to 121 degrees in some spots.

The record-breaking heat wave is blamed for at least four deaths, and is making it even more difficult for crews battling wildfires in several states, reports correspondent John Blackstone.

Pima County Sheriff's Deputies and volunteers from the Southern Arizona Rescue Association ventured out on local trails near Tucson, looking for a group of hikers who'd run into trouble. One man made it out safely; another was found dead.

Hikers determined to press on through the sweltering conditions know that water is their lifeline:

"It's better to overpack water than underpack water," said hiker Wendy Ho, "because I've been on hikes that I just didn't bring enough water and it was really bad."

The heat is affecting air travelers as well. On Sunday, United Flight 6186 from Houston's George Bush Intercontinental Airport was scheduled to land at Phoenix Sky Harbor International Airport, but was diverted back to Houston because of heat-related concerns.

In a battle against the heat, wind and flames, air tankers kept up their high-flying assault over the Sherpa Fire outside Santa Barbara, California.

"If we had a week without wind, we'd be great," said Capt. Dave Zaniboni of the Santa Barbara County Fire Department.

"Unfortunately, that's not predicted. We have to get through these next couple days with red flag warnings."

More than 200 miles to the south, in Potrero, Calif., a wildfire burning near the Mexican border has been fueled by dry brush and extreme temperatures.

Captain Isaac Sanchez of Cal Fire called it a "grueling fight" owing to the heat and rocky conditions: They're doing their best right now."

"I don't have the words": Woman returns to home hit by Harvey

Target CEO on Black Friday: "We have to win that big playoff game"