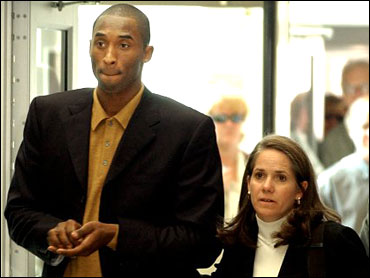 Even if prosecutors here have succeeded in getting Kobe Bryant's rape case bound over for trial they shouldn't pop open any champagne bottles or add this case to their resumes anytime soon. It is now clear, from nearly two days' worth of preliminary hearing testimony, that the case against the basketball star is weak with gusts up to pathetic.

These are not merely temporal problems that come out during a probable cause hearing and then fade away closer to trial, either. These are problems that will stick around even if the district attorney offers a lot more evidence against Bryant if and when the case gets in front of a jury. Any one of these problems could lead any one of Bryant's 12 jurors to find reasonable doubt if they are even half-heartedly looking to do so. And these problems, taken together, probably should have given prosecutors great pause before even bringing a case like this in the first place.

After a crisp day in court during which the attorneys and judge all behaved admirably -- in stark contrast to last week's performances -- let's start with a tally of the physical evidence. Prosecutors say that the alleged victim's blood was on Bryant's shirt and in her own panties. This alone, they say, ought to be enough to get the case to trial.

Perhaps they are right. After all, the evidence during a probable cause hearing must be considered by the judge in a light most favorable to the government. Likewise, an alleged victim's story must be "incredible as a matter of law" in order for a judge to toss a case out at this stage of the proceedings. That's why Bryant's lawyers told Eagle County Court Judge Frederick Gannett that the alleged victim was "not worthy of your belief." Still, what little physical evidence we know exists against Bryant seems overwhelmed by the questions the defense has raised about it.

The blood, for example, certainly is proof that the pair had sex. But it is not necessarily proof that Bryant raped the alleged victim. Did Bryant cause injuries to the woman as a result of forced sex? Prosecutors say yes. But Bryant had no marks on him when he underwent an exam on July 1st and his accuser had just a tiny bruise on her chin -- a bruise the lead detective in the case didn't even see while interviewing her. Moreover, even though prosecutors say Bryant held the woman by the neck during their encounter she apparently had no bruises on her neck. Could there be such little damage to their bodies after such an aggravated encounter?

Meanwhile, the defense has the judge and everyone else wondering how another man's semen got into the underwear the alleged victim wore when she was checked out by local nurses. Can't you see a juror or two or ten believing that another man -- either before the Bryant encounter or after -- may have caused or contributed to these particular injuries? I can. That could be reasonable doubt right there.

Then there is the issue of the woman's credibility. Her own statements put her in Bryant's hotel room making out with him. Indeed, her own statements to the lead detective in the case portray her as someone who stayed late at the hotel to meet Bryant and then schemed with him to get away from his bodyguards. Does this mean she wasn't raped? Of course not. But the alleged victim apparently didn't tell the authorities the full story about other men who may have been in life around this time.

Also, there is now apparently a discrepancy in her story when it comes to whether and to what extent she told Bryant "no" during the assault. The defense is going to try to use this discrepancy to portray this case as a "mixed signal" case -- a case in which Bryant honestly believed he had the woman's consent and immediately stopped once he realized he did not. Again, in order to convict Bryant, jurors may have to give the alleged victim the benefit of the doubt instead of the defendant -- and that isn't likely to happen.

What about the "outcry witness" we heard so much about before this hearing started? Well, one such witness was the night auditor at the resort where Bryant and the alleged victim met. The auditor, a woman, apparently was the very first person Bryant's accuser ran into after she left the defendant's hotel room. What did this person say? She says she does not believe that the alleged victim was assaulted; that the young woman did not look or act as though there had been any problem. In fact, the auditor told investigators that the young woman finished counting out her money drawer before leaving. This does not mean that there were not other "outcry" witnesses the alleged victim encountered that night. We know that the night bellman was another such witness and that Bryant's accuser told him what she says happened. Still, how are prosecutors going to explain away the auditor? And why wouldn't jurors give profound weight to her perception of the alleged victim?

Finally, the common sense angle to all this doesn't seem to help prosecutors. Why didn't the young woman lash out more at Bryant during the assault? Why didn't she immediately tell the night auditor about what happened? Why didn't the guests in the hotel room just above Bryant's hear anything that night even though their windows were open? Why didn't the alleged victim try to leave through the two other doors in Bryant's room -- the sliding doors to a ground-level patio? Is it possible that the young woman had sex with someone else just after the Bryant incident? If so, what does that say about her state of mind? If not, how did that other man's semen get into her underwear? Some of these questions likely will be answered to the district attorney's satisfaction at trial. But all of them? Not likely.

Right now, while recognizing that prosecutors clearly have not played all of their evidentiary cards, the case against Bryant just doesn't add up. It doesn't add up legally and it doesn't add up practically. Usually, a probable cause hearing is pro forma, a nuisance prosecutors have to put up with on their way to trial. But that hasn't happened here. Strong cases usually don't generate these sorts of vital questions this early on. And weak cases like this usually result in plea deals or outright dismissals. So while Bryant's prosecutors ultimately may end up winning the battle of probable cause it looks right now for all the world that the district attorney is almost certain to lose the war at trial. That's good news for Bryant and bad news for the folks who want to see him put away.