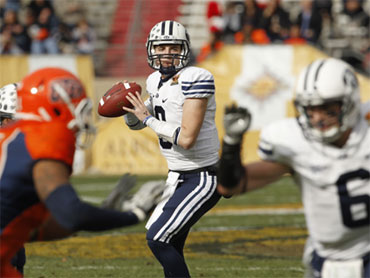 Jake Heaps is BYU's bowl-winning quarterback, and that's no easy feat for a freshman.

While he was one of the nation's top recruits a year ago, Heaps has come a long way from earlier this season when he was sharing snaps with Riley Nelson, who later was injured, and struggling to throw TD passes for the first time in his life.

"But as a group, as an offense, we really stepped it up. We really improved," Heaps said.

Cougars coach Bronco Mendenhall admitted he mismanaged the team when Heaps was splitting time with Nelson, whose injury allowed Heaps a chance to develop.

Heaps showed some toughness, too. He disclosed in the interview room that he has had a broken rib since BYU's last game, a 17-16 loss to Utah on Nov. 27.

"Not because I got sacked," Heaps said. "Because I was being a knucklehead out there, running around."

The victory capped a triumphant turnaround for the Cougars (7-6), whose 1-4 start included a rare loss to instate rival Utah State. At that point, Mendenhall told his team it would be a remarkable feat to reach a bowl game and win it.

"I'm just really proud of our team. In all facets of the game, we have improved," Heaps said. "It's so rewarding, looking back on this game and the way our season has gone. It has just been a very special season."

Hoffman had eight catches for 137 yards, while Joshua Quezada ran for 101 yards and J.J. DiLuigi added 98 yards on the ground to help the Cougars in their final contest before they begin play as an independent in football next season.

Heaps became the first freshman quarterback to start any of BYU's 29 bowl games. For most of the day, he looked like a polished veteran and showed why he was one of the nation's top recruits coming out of high school in the Seattle suburbs in 2009.

He completed seven of his first nine attempts, with both of those incompletions on drops.

"He was composed," UTEP coach Mike Price said. "He didn't play like a freshman. He played like a veteran. He threw the ball in there very accurately and was tough. He commanded their offense."

The Cougars raced to a 14-0 lead. J.D. Falslev returned the game's first punt 43 yards to set up a 4-yard TD run by Bryan Kariya. Heaps threw a 9-yard strike to Luke Ashworth, a 31-yard pass to Hoffman and made it 31-3 midway through the second quarter on a 3-yard pass to Hoffman.

On that play, Heaps also broke Ty Detmer's 22-year-old BYU freshman record for most passing TDs in a season. Heaps, who finished with 15 TD passes on the year, was 25 of 34 with one interception and was selected the game's most valuable offensive player.

"Our offense had to regroup," Heaps said. "We kind of had to start over when I got named the starter because now it was focused around what my strengths were. And this last game, we showed what we're capable of on offense."

BYU also got two interceptions and one of the team's four sacks from Andrew Rich, voted the most valuable defensive player.

UTEP's season went in the opposite direction compared to BYU, with the Miners losing six of seven after opening 5-1. They still reached a bowl game for the first time since 2005 but dropped to 0-5 since beating Mississippi 14-7 in the 1967 Sun Bowl.

Trevor Vittatoe, who postponed surgery on his left ankle so he could play in the postseason, threw three TD passes, all to Kris Adams on plays of 67, 37 and 49 yards. But that was the bulk of the offense for the Miners, whose 233 total yards included minus-12 yards rushing.

"We had opportunities and didn't make plays," said Vittatoe, who was 14 of 29 for 245 yards with two interceptions. "It would have been nice to me if we could have won this game, since it was our one and only opportunity at a bowl game."