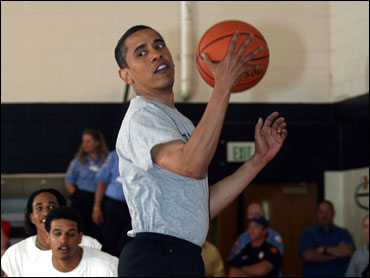 With the House debate raging over the health care bill going on at the same time the NCAA tournament was in full swing, CBS News White House correspondent Mark Knoller asked what, exactly, President Obama -- a college basketball fan who filled out a bracket for the second straight year -- was watching.

After basketball wrapped up, Knoller notes, CBS was turning to "60 Minutes," which tonight featured Katie Couric's interview with White House Chief of Staff Rahm Emanuel. No word on whether Mr. Obama changed the channel.

The president spoke with wavering House members on the phone Sunday in the run-up to the final vote. He spent much of his day in Emanuel's office with his legislative team, according to Gibbs; the White House released two photos of him, one of which is below and one of which is posted here.

A White House senior staff member, meanwhile, said Mr. Obama spent the day in the West Wing getting updates on the health care vote, checking in with staff, "and like the rest of America, examining the rubble of his NCAA bracket."

The White House announced Sunday that Mr. Obama will make a statement following the House vote. If the Senate bill passes the House, it goes to the president's desk, though he is not expected to sign the bill on Monday.

A White House aide tells CBS News Mr. Obama has had over 90 phone calls and/or meetings with members of Congress on health care reform over the past week.