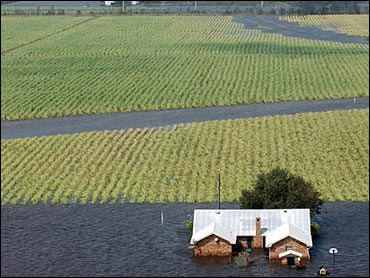 One by one, they traveled through the floodwaters to get their first glimpse at what happened to their homes, their towns and what once were fields of rice and sugarcane.

They came back with stories of flooding to the rooftops, stilts where their houses once stood, coffins and refrigerators bobbing in the water, and expressions of relief that they had evacuated before Hurricane Rita rolled in.

"All I got now is my kids and my motorhome," Tracy Savage said Sunday. And for the 33-year-old diesel mechanic from rural Vermilion Parish, that was enough. "We've never had this much water — we've just never seen it."

As the misery wrought by Hurricane Rita came into clearer view — particularly in the hard-hit marshy towns along the Texas-Louisiana line — the lasting signs that emerged a day after the storm's 120-mph landfall were of an epic evacuation of 3 million people that saved countless lives and a storm that mercifully skirted Houston and more populous stretches of coast.

"As bad as it could have been, we came out of this in pretty good shape," said Texas Gov. Rick Perry, who called the lack of widespread fatalities "miraculous." By Sunday night, just two deaths had been blamed directly on Rita.

Coming on the heels of Hurricane Katrina, where many chose to ride out the storm and the death toll has risen above 1,000, the news coming from the aftermath of Rita was for the most part positive.

Petrochemical plants that supply a quarter of the nation's gasoline suffered only a glancing blow, with just one major plant facing weeks of repairs. The reflooding in New Orleans from levee breaks was isolated mostly to areas already destroyed and deserted, and could be pumped out in as little as a week.

And contrary to dire forecasts, Rita and its heavy rains moved quickly north as a tropical depression instead of parking over the South for days and dumping a predicted 25 inches of torrential rains.

Along the central Louisiana coastline, where Rita's heavy rains and storm-surge flooding pushed water up to 9 feet in homes, officials estimated about 90 percent of residents got out before Saturday's pre-dawn arrival.

For those who didn't, rescue boats and helicopters were dispatched Sunday to find people possibly stranded in attics or on rooftops. About 500 people were rescued from high waters along the Louisiana coast in the immediate aftermath of the storm and emergency calls were still coming in from far-flung areas near the gulf.

During a helicopter tour, Louisiana Gov. Kathleen Blanco, whose Cajun roots run deep in the region, got her first look at the hardest-hit areas.

CBS News correspondent Randall Pinkston reports that Cameron Parish, just across the state line from Texas and in the path of Rita's harshest winds east of the eye, was mass destruction,

and a community of 2,000 has practically nothing to come home to (video).

Fishing communities were reduced to splinters, with concrete slabs the only evidence that homes once stood there. Debris was strewn for miles by water or wind. Holly Beach, a popular vacation and fishing spot, was gone. Only the stilts that held houses off the ground remained.

A line of shrimp boats steamed through an oil sheen to reach Hackberry, only to find homes and camps had been flattened. In one area, there was a flooded high school football field, its bleachers and goal posts jutting from what had become part of the Gulf of Mexico.

"In Cameron, there's really hardly anything left. Everything is just obliterated," said Blanco, who has asked the federal government for $34 billion to aid in storm recovery.

After navigating through swimming cattle, dead alligators and floating coffins, Joe Mouton was able to salvage some clothing, and some hope, from his father's house the tiny Louisiana outpost of Mouton Cove.

"We will stay here," Mouton said, slumping in the afternoon sun after the boat trip that began at daybreak. "We've got too much property, too much at stake, too much history, to leave."

After a briefing with Blanco in Baton Rouge, President Bush said: "I know the people of this state have been through a lot. We ask for God's blessings on them and their families."

He said the region has been secured by law enforcement, but does not have water and sewer services available. He urged residents to stay out for now, though the statewide picture was better.

"Even though the people right here in Beaumont and Port Arthur and this part of Orange County really got whacked, the rest of the state missed a bullet," Perry said.

Among the deaths attributed to Rita — a person killed in north-central Mississippi when a tornado spawned by the hurricane overturned a mobile home and an east Texas man struck by a fallen tree. Two dozen evacuees were killed before the storm hit in a fatal bus fire near Dallas.

In Houston, which along with coastal Galveston was spared the brunt of Rita, officials set up a voluntary, staggered plan for an "orderly migration" to avoid the massive gridlock that accompanied the exodus out.

The return appeared to be going well Sunday with traffic moving briskly, but not all Texans were happy with the plan. John Willy, the top elected official in Brazoria County, southwest of Houston, said he would ignore the state's schedule.

"I am not going to wait for our neighbors to the north to get home and take a nap, before I ask our good people to come home," he said in a statement. "Our people are tired of the state's plan! They have a plan too and it's real simple. They plan to come home when they want."

the closest working gas station was more than 90 miles away (video).

Crude oil and gasoline futures traded lower Sunday, a response to news that damage to refineries was relatively light. The 255,000-barrel-per-day Valero Energy Corp. plant in Port Arthur appeared to be the most heavily damaged, facing at least two weeks of repairs from significant damage to two cooling towers and a flare stack.

they will not be as high as $6 a gallon that some analysts feared (video).
View CBS News In
CBS News App Open
Chrome Safari Continue
Be the first to know
Get browser notifications for breaking news, live events, and exclusive reporting.