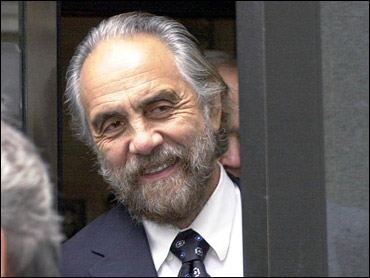 Tommy Chong, who played one half of the dope-smoking duo in Cheech and Chong movies, pleaded guilty in federal court Tuesday to conspiring to sell drug paraphernalia.

Chong's attorneys said he was accepting responsibility, but noted he was careful not to sell to minors.

"This isn't his work. His work is that of a comedian and satirist," said attorney Richard G. Hirsch.

After the hearing, Chong said he did not use drugs. "I don't smoke; I quit," he said.

The actor-comedian, who recently had a recurring role on Fox's "That '70s Show," said he planned to return to what he's always done: speaking "the truth" in his comedy routines. He was scheduled to appear in Florida on Tuesday night.

Chong said he and Cheech Marin were back together and working on another movie; the two have appeared together in several films, including "Up in Smoke" and "Still Smokin'." His plea, he said, would be part of the new film.

Chong's plea came after federal Drug Enforcement Administration agents purchased his paraphernalia and had them shipped to an undercover business. Agents also confiscated his company's paraphernalia during raids of "head shops" in numerous states and confiscated "thousands of marijuana bongs and pipes" in a raid of his Gardena, Calif., business.

The raids were part of a series by the DEA in which at least 55 people were charged with trafficking in illegal drug paraphernalia. Officials said the investigation targeted the nation's biggest Internet distributors of paraphernalia.

Chong, 64, was released on recognizance bail, but must undergo drug testing and remain in the U.S. District Court jurisdiction of his Pacific Palisades home except to travel for work and court appearances.

He faces a maximum sentence of three years in prison and a $250,000 fine when he is sentenced Sept. 11. Federal guidelines call for six months to one year incarceration, though Buchanan said the government would not make a recommendation to U.S. District Judge Arthur J. Schwab.