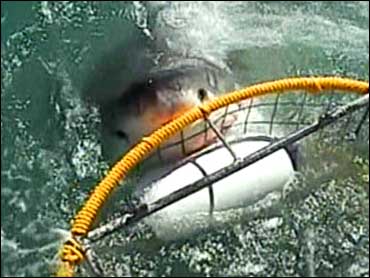 Great white sharks that cruise off South Africa have become a big draw for tourists looking for thrills. The trick though, reports CBS News Correspondent Mark Phillips, is to get to see the top of the marine food chain, without becoming part of it.

Phillips explains that thrill-seekers get close-up views of the sharks from the relative safety of cages. Operative word: relative.

But British tourist Mark Currie, who was videotaped by a friend, got closer than he had counted on.

On The Early Show Monday, Currie and co-anchor Hannah Storm watched the

video
together. He told her that brought "back to me, really, how close I was to getting eaten, but I enjoyed every minute of it. It was the best thing I ever did. 'Cuz I was able to go face-to-face with a great white and have it attack me and be able to get away with all my limbs intact."

Currie recounted that there were "two sharks swimming around, and this big, huge great white came and swam right past the boat. …The captain said, 'You still want to go down?' I said, "I'm not coming all this way not to do it.' So I jumped in the cage and it circled me twice and it just attacked.

He started chomping at the buoy.

He almost got my arm. So I moved my arm, and I'm trying to get back…and at that point, I wasn't really scared, 'cause I thought, 'I'm inside a stainless steel cage, and there's no way the shark can get in.' I was enjoying watching him bite the cage. But then, when I realized it popped one of the (cage's) buoys and tilted (the cage)…and it crushed the side of the cage I thought…

"I couldn't believe he was getting through. I thought the cage was supposed to be safe.

"He's coming from the top. It was an open-top cage. So I was trying to stay down in the cage."

Currie didn't have any breathing apparatus, and was underwater a good part of the time. Every time he surfaced for air, the shark, he says, was right there, at one point, getting so close Currie was "putting my elbow beside him at the side of its mouth."

"Every time I had my head above water, I could hear the people on the boat screaming."

It went on for two minutes.

Then Currie decided he had to leap for the boat, and he did. And made it, with the captain pulling him on board. "If I'd have slipped," he says, "I would have slipped into the shark's mouth."

Yet, Currie insists he would do it again. "Yeah. Definitely."