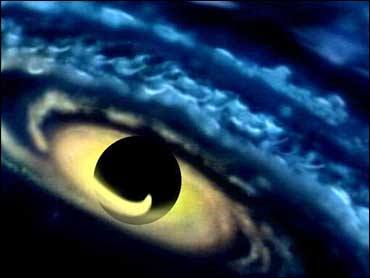 Famed astrophysicist Stephen Hawking said Wednesday that black holes, the mysterious massive vortexes formed from collapsed stars, do not destroy everything they consume but instead eventually fire out matter and energy "in a mangled form."

Hawking's radical new thinking, presented in a paper to the 17th International Conference on General Relativity and Gravitation in Dublin, capped his three-decade struggle to explain an elemental paradox in scientific thinking: How can black holes destroy all traces of consumed matter and energy, as Hawking long believed, when subatomic theory says such elements must survive in some form?

Hawking's answer is that the black holes hold their contents for eons but themselves eventually deteriorate and die. As the black hole disintegrates, they send their transformed contents back out into the infinite universal horizons from whence they came.

Previously, Hawking, 62, had held out the possibility that disappearing matter travels through the black hole to a new parallel universe — the very stuff of most visionary science fiction.

"There is no baby universe branching off, as I once thought. The information remains firmly in our universe," Hawking said in a speech to the conference.

"I'm sorry to disappoint science fiction fans, but if information is preserved, there is no possibility of using black holes to travel to other universes," he said. "If you jump into a black hole, your mass energy will be returned to our universe, but in a mangled form, which contains the information about what you were like, but in an unrecognizable state."

At that point, the audience of about 800 people, including many of his peers, laughed.

He added, "It is great to solve a problem that has been troubling me for nearly 30 years, even though the answer is less exciting than the alternative I suggested."

In a humorous aside, Hawking settled a 29-year-old bet made with Caltech astrophysicist John Preskill, who insisted in 1975 that matter consumed by black holes couldn't be destroyed. He presented Preskill a favored reference work "Total Baseball, The Ultimate Baseball Encyclopedia" after having it specially flown over from the United States.

"I had great difficulty in finding one over here, so I offered him an encyclopedia of cricket as an alternative," Hawking said, "but John wouldn't be persuaded of the superiority of cricket."

Later, Preskill said he was very pleased to have won the bet, but added: "I'll be honest, I didn't understand the talk." Like other scientists there, he said he looked forward to reading the detailed paper that Hawking is expected to publish next month.

Hawking pioneered the understanding of black holes — the matter-consuming vortexes created when stars collapse — in the mid-1970s. He has previously insisted that the holes emit radiation but never cough up any trace of matter consumed, a view that conflicts with subatomic theory and its view that matter can never be completely destroyed.

Hawking, a mathematics professor at Cambridge University, shot to international fame with his best-selling book "A Brief History of Time," which sought to explain to a general audience the most complex aspects of how the universe works.

Despite being virtually paralyzed and wheelchair-bound with amyotrophic lateral sclerosis since his mid-20s, Hawking travels the world on speaking engagements. He communicates by using a hand-held device to select words on his wheelchair's computer screen, then sending them to a speech synthesizer.