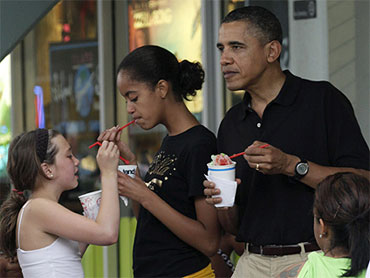 There are those who crave adventure and spontaneity during their vacations. Then, there's President Barack Obama.

More than a week into his Hawaiian holiday, Mr. Obama is proving to be a creature of habit, seeking refuge in the comfort and consistency of a familiar routine.

The president's itinerary during his annual trip to Oahu, the island where he was born and mostly raised, is downright predictable. He is almost certain to spend his mornings working out at Marine Corps Base Hawaii. A leisurely dinner with friends and family at Alan Wong's Restaurant, an award-winning eatery in the neighborhood where Mr. Obama grew up, is a yearly tradition. And a guaranteed place to spot the president is at Island Snow, a shop near his rented oceanfront home, where he treats daughters, Malia and Sasha, to shave ice, the Hawaiian version of the snow cone.

So, doesn't the president ever want to mix things up a bit, maybe go somewhere new?

Not really, says White House spokesman Bill Burton, who is with the president in Hawaii.

"Like most Americans, the president knows what he likes in his own hometown," Burton said. "He's been going to a lot of these places since he was a very young child and they hold an important place in his life."

Of course, things have changed since the days when Mr. Obama lived here with his grandparents and scooped ice cream at a local shop. The logistics of any presidential movement make a truly spontaneous stop nearly impossible. Advance teams scope out all potential destinations ahead of Mr. Obama's arrival, and Secret Service agents have to sign off on security.

That means no more walks in the park or swimming at public beaches. The Obamas now spend their beach time at Pyramid Rock, a secluded spot on the marine base, and snorkel only at Hanauma Bay on Tuesdays, when the nature preserve is closed to the public. There are also no more rounds of golf at Olomana, a course next to a busy highway where Mr. Obama played as senator. He instead opts to play at the course on base or at the more secluded Mid Pacific Country Club.

Another familiar element of Mr. Obama's Hawaiian vacations is the small circle of friends and family he surrounds himself with while he's here. His sister, Maya Soetoro-Ng, lives on Oahu with her family. Marty Nesbitt and Eric Whitaker, two of Mr. Obama's friends from Chicago join him here for the holidays, as do childhood friends Mike Ramos and Bobby Titcomb.

Titcomb's house on Oahu's North Shore has also become a regular stop for the president. Mr. Obama attended a barbecue there Thursday, with his 20-car motorcade making the hour-long trip across the length of the island.

While Mr. Obama's trips here still generate excitement, some Hawaii residents would like to see the president more engaged with the community.

"I know security and logistics can be a challenge, but I would love to see him visit a couple of neighborhoods," said Eve Proenca, who lives in Honolulu's Kaimuki area.

"Just because we're in Hawaii and it's paradise doesn't mean it's paradise for everyone," said Mike Irvine, who has lived in Honolulu since 1985. "Going to a black church, or maybe a homeless shelter would be a big deal."

"Security and logistics, I know that can be a challenge, but I would love to see him visit a couple of communities," he said.

Mr. Obama's desire for consistency and familiarity during his vacations is nothing new for occupants of the Oval Office. Ronald Reagan frequently retreated to his mountaintop ranch near Santa Barbara, California, spending more than a year there over the course of his presidency. George H.W. Bush sought sanctuary at his oceanfront home in Maine, and his son, George W. Bush, rarely left his sprawling ranch during trips to Crawford, Texas.

Former President Bill Clinton was the rare exception. He was often spotted jogging, sailing and dining out during summer trips to Martha's Vineyard. And with no vacation home of his own, Clinton varied his destinations, traveling to Jackson Hole, Wyoming, golfing on Amelia Island, Florida, and skiing in Park City, Utah.