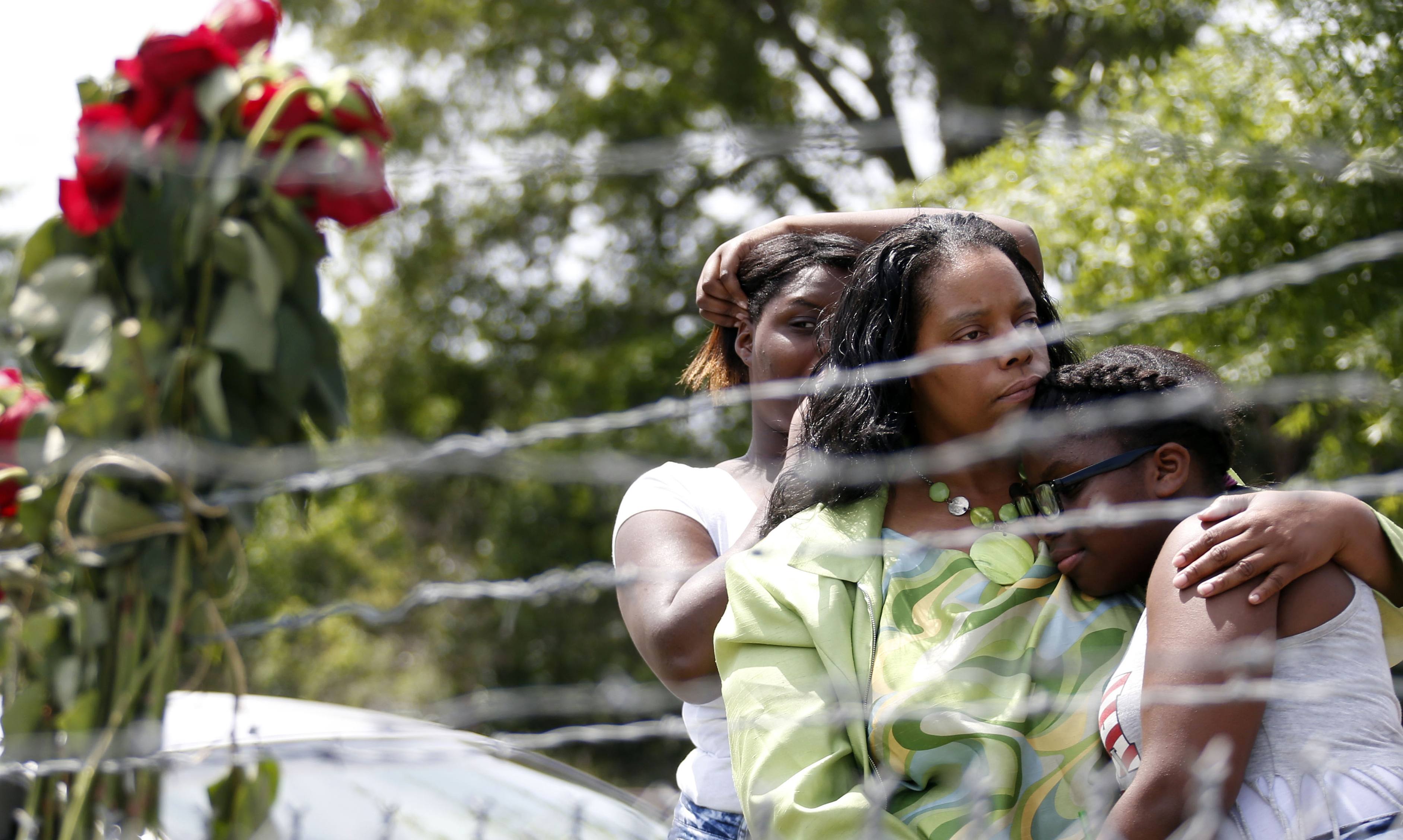 HATTIESBURG, Miss. -- One was a decorated "Officer of the Year." The other was a proud recent graduate of the academy who had wanted to be a policeman since he was a boy.

A routine traffic stop led to their shooting deaths Saturday night -- the first Hattiesburg police officers to die in the line of duty in more than 30 years. Four people were arrested, including two who were charged with capital murder.

The deaths of Officers Benjamin Deen and Liquori Tate stunned this small city in southern Mississippi.

On Sunday morning, bloodstains still marked the street where the two were shot, and a steady stream of people visited the site to leave flowers or balloons. In the nearby New Hope Baptist Church, worshipers prayed for the fallen officers and their families.

"This should remind us to thank all law enforcement for their unwavering service to protect and serve," Mississippi Gov. Phil Bryant said in a statement. "May God keep them all in the hollow of his hand."

Marvin Banks, 29, and Joanie Calloway, 22, were each charged with two counts of capital murder, said Warren Strain, a spokesman for the Mississippi Department of Public Safety. Banks also was charged with one count of being a felon in possession of a firearm and with grand theft for fleeing in the police cruiser after the shooting, Strain said.

"He absconded with a Hattiesburg police cruiser. He didn't get very far, three or four blocks and then he ditched that vehicle," Strain said.

Banks' 26-year-old brother, Curtis Banks, was charged with two counts of accessory after the fact of capital murder.

The fourth person, 28-year-old Cornelius Clark, was arrested and charged with obstruction of justice, he added.

All four are expected to make their initial court appearances Monday at the Forest County Justice Court, Strain said.

Sunday evening, members of the community gathered for a candlelight vigil to honor the officers, according to CBS affiliate WHLT in Hattiesburg. A memorial service is planned for Monday.

A preliminary investigation indicated Deen had pulled over the vehicle on suspicion of speeding and then called for backup, which is when Tate arrived. Strain said it was too early to say who shot the officers or how many shots were fired.

The U.S. flag flew at half-staff outside the Hattiesburg Police Department, and red roses placed on a concrete sign wilted in the afternoon sun.

For many in the community, the first death of an officer in three decades while on duty was a shock. The pain hit particularly close to home for Erica Sherrill Owens, whose mother, Sgt. Jackie Dole Sherrill, was killed in 1984 while trying to serve a warrant on a suspect.

When Owens heard that two officers had been killed, she said she hoped it wasn't someone she knew.

"Then when I heard one of the names, my heart just sank because I went to high school with him," Owens said, who had gone to Sumrall High School with Deen and graduated a year after him in 1999.

"We were great friends in high school. He married his high school sweetheart and he's got two kids and a great family," she said. "It's just heartbreaking."

Local reports identified Deen, 34, as a former "Officer of the Year" in Hattiesburg.

After high school, Owens said she would see Deen around town and recalled the day he graduated from the police academy.

Tate, 25, grew up in Starkville, 150 miles north of Hattiesburg. Strain said he was a 2014 graduate of the law enforcement academy.

He was known to his friends as "CoCo," said his stepfather, B. Lonnie Ross of Jackson, adding that Tate was 12 when they met and already wanted to be a policeman.

"He was the most respectful young man you would meet. It was a pleasure to meet someone so gentle and nice," Ross said. "Everybody who met him liked him."

Jarvis Thompson, who knew Tate from childhood, said he wanted to be a policeman to make a difference in the black community.

"He wanted to become an officer because we've seen so much of our peers get killed or end up in jail," said Thompson, 24, of Starkville. "He was talking all the time about how he wanted to do better and make the place better."

Alberta Harris, who heads the Briarfield Neighborhood Association near the shooting site, said she knew both officers, and "both of them had a humble spirit. They cared about the people that they were serving and protecting."

At a news conference, Mayor Johnny DuPree asked the community to pull together.

Tony Mozingo, a local judge, left red roses near the scene of the shooting.

"We all just are heartbroken because we know and work with these officers every day," said Mozingo, accompanied by his wife and two daughters.

At the nearby New Hope Baptist Church, the congregation prayed both for the slain officers and for their relatives during services Sunday morning - Mother's Day.

"It's sad. It's just a tragedy, going from one mother to another," said Dorothy Thompson, wife of the pastor. "Every day is a bad day (for violence), but especially on a day like today."

It was the second time that two Hattiesburg police officers were killed together.

On March 9, 1952, Hattiesburg officers James Everett and M.W. Vinson Jr. were both gunned down as they chased suspects in a burglary at the Ace Weathers Motor Co., according to police records. They were the first two Hattiesburg officers killed in the line of duty, records show.