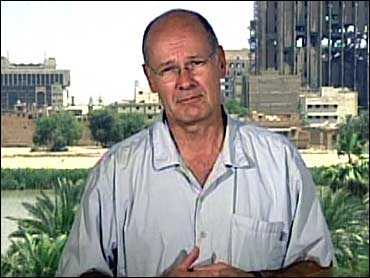 The Early Show co-anchor Harry Smith is back in Baghdad for the first time in just over three years, and conveyed some quick first impressions.

"One thing I am struck by immediately is the hulking ruins of the buildings that were bombed at the beginning of the war. … It's kind of a stark reminder of just how little has changed over the last three years or so," he said.

"A perfect example of how terrible this violence has gotten is an Iraqi employee of ours at CBS News. His father, a Sunni living in a mixed and primarily Shiite neighborhood, moved out just two weeks ago to protect his family. When he went back this past week, to tie up some unfinished business, he was murdered.

"That kind of thing happens on a fairly routine basis here. It's not the kind of thing that makes the headlines, like an insurgent bombing, but that sort of violence is part of everyday life.

"Now, the one other example I can give you of what the security situation is like here is that the area just around our hotel is very, very secure but, when I asked our folks if I could go down to the corner out of the secure zone to get an ice cream (Thursday) night, they said it's a risk just simply not worth taking."