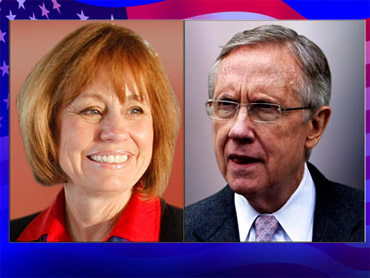 In March, Hotsheet reported that GOP Sen. Tom Coburn of Oklahoma was introducing an amendment to the health care reform reconciliation bill entitled "No Erectile Dysfunction Drugs To Sex Offenders." It was part of a strategy to slow or stop the legislation by offering amendments on which Democrats would be hard-pressed to cast a "no" vote.

Democrats pressed members to vote no on the so-called "poison pill" amendments in order to move the legislation forward. It was not a prospect they relished.

"By opposing that amendment, Democrats are, at least in theory, opening themselves up to charges that they support using government money to provide sex offenders with Viagra -- surely an unpopular position if ever there was one," we noted at the time.

Now that situation has come to pass in the Nevada Senate race.

In a new ad, Republican challenger Sharron Angle attacks Senate Majority Leader Harry Reid on the issue, saying he "actually voted to use taxpayer dollars to pay for Viagra for convicted child molesters and sex offenders."

"What else could you ever need to know about Harry Reid?" the narrator in the ad asks, as ominous music plays.

The ad references bill H.R.4872 to back up its claim - the very health care reconciliation bill into which Coburn introduced the amendment.

Reid never explicitly voted for taxpayer money for Viagra for child molesters and sex offenders, of course. But Coburn's rejected amendment was enough for the Angle campaign to put that claim in their attack ad.