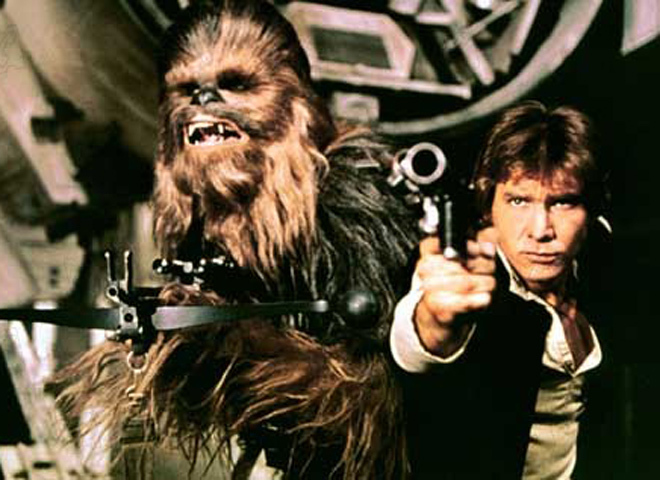 It looks like we're one step closer to an official word that the J.J.Abrams-directed "Star Wars VII" will see the original cast reunited again. And the latest news has come from none other than Han Solo himself.

Harrison Ford recently told WGN9 News at a Michigan Avenue magazine cover party in Chicago that the "old gang" is reuniting -- or at least, he's pretty sure they are. "I think it's almost true. I'm looking forward to it ... it's not in the bag yet, but I think it's happening," said Ford in a semi-confirmation.

But we'll take it. Rumors have been swirling throughout the stratosphere lately as to whether the trio would reprise their original roles in "Star Wars: Episode VII," which is expected to be released in 2015. And the rumors are coming from the people who would know. First Carrie Fisher let it slip that she may be donning her signature buns again, and then creator George Lucas all but put the final nail in the spaceship, when he said, "we had already signed Mark and Carrie and Harrison -- or we were pretty much in final stages of negotiation."

And now that the man, the myth, the legend, Han Solo himself has spoken up -- so we have no where to go but up up and away from here. Now all we need is an official announcement from Lucasfilm owner Disney, and the force shall officially be with us (in 2015 that is).

Tell us: Are you excited to see the original cast reunited? How do you think they will work their "new" ages into the film?