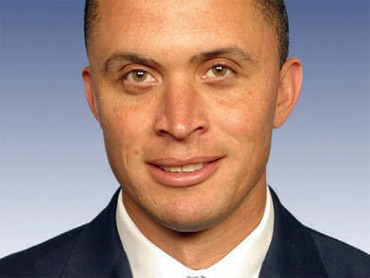 (U.S. Government)
It's not hard to find people who don't want former Tennessee congressman Harold Ford, Jr. to run for the Democratic Senate nomination in New York this year.

Start with the state's two senators: Kirsten Gillibrand, who he would be challenging for the nomination, and Charles Schumer, who has worked to clear the field for his colleague.

Then there's the state's governor, David Paterson, who told the New York Times that Ford, who moved to New York three years ago and took a job at Merrill Lynch, "might look for another state to run a primary." (It should be noted that Paterson, somewhat confusingly, also said "I think it's O.K. for anyone to challenge anybody in a primary this year.")

And then there's the White House: At his press briefing yesterday, press secretary Robert Gibbs told reporters that "the White House is quite happy with the leadership and the representation of Senator Gillibrand in New York." He added: "We're supporting her reelection."

(Gibbs didn't get that quite right: Gillibrand was never elected to the Senate, having been appointed to Hillary Clinton's seat when Clinton became Secretary of State.)

That isn't to say that Ford doesn't have his backers. Among them are some top Democratic donors, including Steven Rattner, who have not warmed to Gillibrand despite her strong fundraising abilities. Also potentially in that category is the New York Post, which put Ford on its front page today and gave him space to detail why he is "strongly considering" a Senate run in New York.

"New Yorkers expect a politics where politicians do what's right based on independent judgment, free of political bosses trying to dictate," writes Ford.

That rebuke to his critics isn't the only interesting thing in the editorial: Ford also writes that he is "pro-choice -- have always been since I entered politics almost 15 years ago."

When Ford ran for Senate in 2006 in the more-conservative Tennessee, however, he called himself "pro-life," as the Times notes. (NARAL ProChoice NY posted a video of Ford repeatedly asserting his pro-life status.)

He also writes that "after listening to and participating in the national conversation about full equality and fairness, I support same-sex marriage."

That's a striking claim because when he was in Congress, Ford was among a small group of Democrats who backed a constitutional amendment to ban gay marriage. As Ben Smith notes, in 2006 he called claims that he backed gay marriage "lies" and a "wild and false allegation."

If he does run, Ford can at least take solace in the fact that he wouldn't be the only candidate open to charges of flip-flopping: Gillibrand, who hails from a relatively conservative upstate district, moved to the left on gun control and immigration upon her appointment to the Senate.

Ford's potential candidacy is surprising in part because Gillibrand seemed more vulnerable to a challenge from the left than the right. He chairs the centrist Democratic Leadership Council, a group that many on the left view as too willing to compromise on major issues.

Ford is reportedly working on a book set to come out one week before the primary.