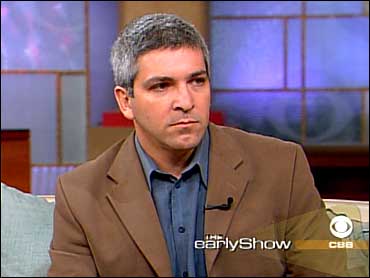 The crowd was on its feet for the final out and fans went away whooping like the Cincinnati Reds had just won a playoff game.

It's been a long time since baseball was so much fun in Cincinnati.

With the Reds headed nowhere as they slash payroll and rebuild, the intrastate rivalry took on special significance for the home team and its beleaguered fans.

"We haven't had a big crowd like that in a long time," said Boone, whose single off Charles Nagy (7-3) set up the winning run in the seventh. "I guess the last time we had a crowd like that was in the '95 playoffs. There's nothing like it."

The Indians' first game in Cincinnati was a box-office smash the Reds sold 43,532 tickets, their best gate since opening day. Thousands of fans made the four-hour drive from Cleveland, where Jacobs Field is sold out for the season, to root for the visiting team.

Harnisch (6-1) quieted them and set up only Cleveland's third loss in 11 games by allowing four hits over seven innings, including Jim Thome's solo homer in the sixth.

Once the Reds went up 2-1 on Lenny Harris' run-scoring groundout in the seventh, two former Indians settled personal scores and held the lead. Danny Graves, traded to the Reds last July as part of the package for John Smiley, pitched a perfect eighth by retiring the Indians' 2-3-4 hitters.

With half of the crowd on its feet rooting for an out and the other half hoping for a game-winning hit, Jeff Shaw struck out David Bell with a runner on second to end the game and get his 17th save in 21 chances. Shaw was the Indians' top draft pick in 1986.

The Reds have won three of their four interleague games against the Indians. They took 2-of-3 last season at Jacobs Field.

"Every time we play them, it means a lot to me," said Shaw, who likes to prove the Indians wrong for letting him go after the '92 season. "I get jacked out of my mind playing them. I want to beat them every game."

So did his setup man.

"I honestly felt like it was Game 7 of the World Series," Graves said. "I always get up for games, but these guys are so good that to go in and shut them down was great. To be able to show them what they lost makes it so much better."

While the Reds celebrated their closest thing to a playoff win, the defending American League champions shrugged it off.

"We couldn't get anything off Harnisch and Graves and Shaw," manager Mike Hargrove said. "When we did hit the ball, it was right at somebody. Those things happen."

Boone opened the Reds' seventh with a hard grounder down the third baselineTravis Fryman fielded but made a high throw that pulled Thome off first base, giving Boone an infield single. Jon Nunnally doubled over Kenny Lofton's head in center, and Harris' pinch groundout scored Boone from third.

"I made a bad pitch to Nunnally a fastball up," Nagy said. "If I get that down, we're probably still playing."

It was Cleveland's first game in a riverfront stadium that is an integral part of franchise history. Pete Rose ran over Ray Fosse to win the 1970 All-Star game, epitomizing the huge gulf between Big Red Machine and the forgotten Tribe during that decade.

Their game Friday showed how much times have changed. Chief Wahoo was everywhere on banners, on jackets and caps and the cheers for the Indians were at least as loud as those for the Reds.

In the last two years, cost-cutting Cincinnati has become akin to a Cleveland farm team, trading its best starters Smiley last year, Dave Burba this year to the Indians for prospects and payroll room.

Notes: The three-game series has become a financial boost to the money-strapped Reds. Saturday's game is sold out and a big crowd is expected Sunday. The stadium record for attendance at a three-game series is 152,565 for a series against Los Angeles from Aug. 6-8, 1994. ... Thome's homer extended his hitting streak to 11 games. Nine of his last 11 hits have been for extra bases. ... Nagy was pitching for the first time since becoming a father. His wife, Jackie, gave birth to the couple's first child, a girl, on Wednesday. ... Nagy went 0-for-3 at the plate, striking out twice. He's 1-for-8 career. ... It was Boone's fourth four-hit game this season and the 10th of his career. ... Cincinnati's Dmitri Young was 0-for-4, ending his hitting streak at nine games.