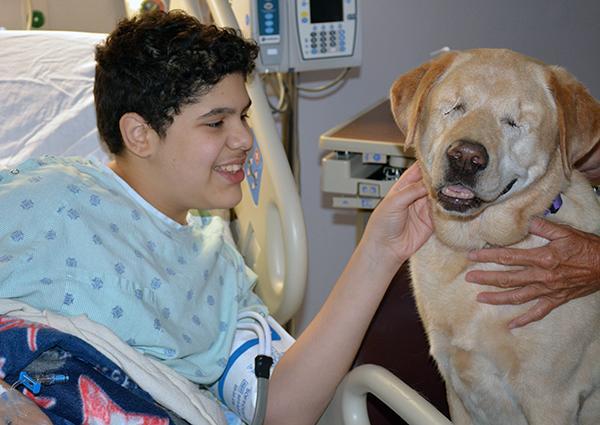 Harley may not have her eyes anymore, but anyone who knows the 10-year-old yellow Labrador will tell you it's easy to see she's touched dozens of lives.

The dog developed glaucoma at the age of 5. Dogs with the condition usually lose their eyesight gradually, but Harley went blind almost overnight. Veterinarians still have no idea why.

A few months later, due to the painful condition, her eyes had to be removed.

"When she went blind I didn't want to take her eyes out at all. That was too final for me," Harley's owner, Rita Harrell, told CBS News. "I was good with her being blind and having eyes, you know, but taking her eyes out meant this was never going to get better."

But she soon realized it was the right decision.

"When we took her eyes out it was almost like she was a new dog. She was like a puppy again," Harrell said. "She's just really special."

So special, in fact, Harrell knew she had to share the sweet pup with the world.

One day, while watching television, Harrell saw a show about therapy dogs. She looked down at Harley and something just clicked.

"Harley would be perfect for this," Harrell recalled telling herself. "She's not afraid or intimidated by anything. She can't see."

Harley has been "working" for three years now, and she loves every minute of it.

"When we're getting ready to go somewhere I say, 'We're going to work,' and she jumps down the steps, runs the through yard to the truck and just sits outside truck, shaking — she can't wait to get to work," Harrell said.

One of Harley's favorite places to visit: Shriners Hospital for Children.

"She does best with kids," Harrell explained. "Kids can just be all over you and she likes that contact."

When Harley arrives, nurses place a chair next to a patient's bed and Harley jumps on top of the chair and places her head down on the bed — ready for a pat.

Harley visits as part of a pack of 8 dogs, but she's always been the one to stand out.

"Everyone always gravitates to her, cause she's Harley," Harrell said.

For now, Harley comes to the children's hospital every week, and pays additional visits to a nursing home or treatment center every month or so. Since Harrell has a full-time job, it's hard to make the time to do more, but she hopes that will change in the near future.

"We're going to wait until I retire and we're just going to go all over," Harrell said.

After all, the kids need her — there's only one Harley.