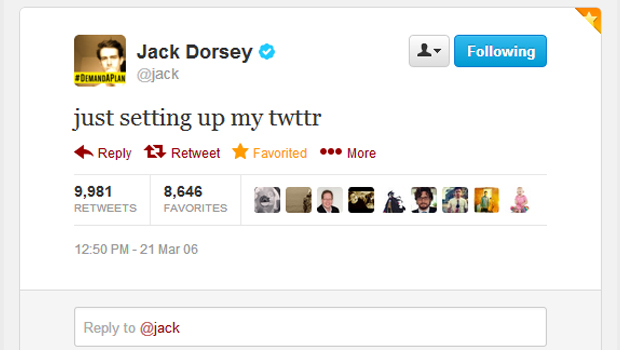 It's amazing to think how the words "tweet" and "re-tweet" have joined the world lexicon in seven short years. Thanks to a simple communications service called Twitter.

In speaking with Lara Logan on "60 Minutes" Dorsey spoke of how he was inspired by the way emergency dispatchers communicated in short bursts.

"They're always talking about where they're going, what they're doing and where they currently are. And that's where the idea for Twitter came," Dorsey said.

Twitter has been a communications outlet for world leaders, politicians, celebrities and spiritual leaders. Since its launch, the microblogging service has been used to break news, propose marriage, and even help enable a revolution.

Early adopters of Twitter used it for everything, including talking about their lunch to networking by setting up events called "tweetups" -- a Twitter meetup. As the service grew, people began expanding their uses for it, as well.

In 2008, Twitter saw what's believed to be its first proposal. On March 8 of that year, Twitter user @maxkiesler sent out a tweet that said, "To @emilychang - After fifteen years of blissful happiness I would like to ask for your hand in marriage?"

About a minute later, @emilychang sent out the tweet, "@maxkiesler - yes, i do!"

They weren't the last to user Twitter for romance. Recently, Virginia senator Mark Warner's Twitter account was used as a medium to send a message to his press secretary Beth Adelson.

"@MarkWarner Senator: your PressSecy pays more attn to this feed than her own - can I borrow this space for a minute?," tweeted @Brett_Wanamaker.

After being granted permission, Wanamaker tweeted, "@MarkWarner @bethaleh Beth Ellen Adelson, will you marry me?"

Twitter had a celebrity breakthrough in 2009 when actor Ashton Kutcher beat out cable network CNN to 1 million followers. While Twitter was already popular at the time, the trend of celebrities joining and gaining millions of followers was just beginning.

The micro-blogging service is has also been known to break news in ways that wouldn't have been possible before.

In 2011, social media services like Twitter, Facebook and YouTube were used to help communicate and organize during the Arab Spring. The protesters used social media to organize, mobilize and document the events with such success that Egypt shut down the Internet and cell phone networks on Jan. 27.

Months later, a man in Abbottabad, Pakistan was believed to be the first person on the planet to report the raid on Osama bin Laden's compound.

"Helicopter hovering above Abbottabad at 1AM (is a rare event)," @ReallyVirtual tweeted on May 2, 2011 from his home in Abbottabad, Pakistan.

President Obama announced to the world later that night that Osama bin Laden was dead. The President said that the United States launched a targeted operation in Abbottabad, Pakistan that successfully took out bin Laden.

Twitter has even played a part in bringing down a promising political career. In May 2011, former New York congressman Anthony Weiner became the biggest victim of a Twitter "DM Fail" when the Weiner accidentally tweeted lewd photos of himself to followers.

Weiner immediately claimed to be a victim of hacking. His story changed after conservative blogger Andrew Breitbart insisted he had additional photos of the congressman. Weiner ultimately admitted his wrongdoing on June 6, and resigned on June 16.

Twitter became a hub for commentary during the U.S. presidential election in 2012. President Obama set a record for the most re-tweeted post on Nov. 7, when administrators for his Twitter account posted a photo of the President hugging first lady Michelle Obama with the caption, "Four more years."

The photo has been retweeted over 811,00 times, to date. The previous record was held by pop star Justin Bieber with 223,401 re-tweets, at the time.

World leaders aren't the only ones to jump on the band wagon. In 2011, the Vatican launched a Twitter account for the pope. The account @Pontifex has been used by then Pope Benedict XVI, and has already sent an update under the newly elected Pope Francis.

What an amazing seven years of tweeting. Happy birthday, Twitter!