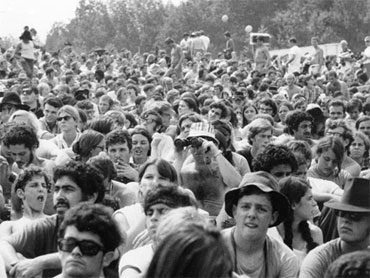 Welcome to middle age, Woodstock Baby _ if you're really out there.

The babies reportedly born at the Woodstock festival 40 years ago remain the most enduring mystery from that chaotic weekend that defined a generation. Depending on the source, there was one birth on that patch of upstate New York farmland between Aug. 15-17, 1969. Or two. Or three. Or none.

There is some tantalizing evidence. Singer John Sebastian is captured on film announcing that some cat's old lady just had a baby, a kid destined to be far out. A couple of surviving eyewitnesses say there were births. The concert's medical director told reporters at the scene there were two births: one at a local hospital after the mother was flown out by helicopter; the other in a car caught in the epic traffic jam outside the site crowded with more than 400,000 people.

But no one has come forward with a credible public claim of giving birth to a Woodstock baby or being born there. No one has produced proof that it happened. If babies were born at Woodstock, they have lived their lives ignoring _ or unaware of _ the fact that reporters and researchers have been on their trail for decades.

"I've searched, I've spoken to the doctors and nurses from the main hospitals that were there," said Myron Gittell, who wrote the new medical history, "Woodstock '69: Three Days of Peace, Music, and Medical Care."

Problem is: No one has been able to dig up a birth record.

Rita Sheehan, town clerk for Bethel, which hosted the concert, said there is no local birth certificate on record. Still, it's possible the birth was recorded in one of the surrounding towns. Gittell says there were births recorded in neighboring towns in that period, but the records are sealed under state privacy laws. There's no way to check whether the birth mothers were locals or out-of-towners (the likely pool of Woodstock Moms).

That leaves a few eyewitness accounts, like that of Gladys Devaney, who was a member of the volunteer ambulance corps in nearby Liberty. She answered an ambulance call to a tent at the festival and saw a young woman in labor. Her overriding concern then was that other medical workers took her stretcher as they rushed the woman away. But Devaney knew labor when she saw it.

"I heard her screaming," Devaney said. "I didn't get a good look at her, she was thrashing."

Devaney never found out whether they took the young woman to a waiting helicopter or somewhere else.

Tiber, who has a reputation for being a raconteur, said the woman gave birth at his parent's hotel near the site, which _ like the entire area that weekend _ was mobbed. The woman wore a leather jacket, came in on a motorcycle and just flopped down.

"I see she's starting to give birth," Tiber recalled. "It was like the quote from `Gone With the Wind': `I don't know nothing about birthing no babies, Miss Scarlet' ... I was screaming, just screaming. Everybody was standing around stoned saying, `Yeah, groovy!' They thought it was cool."

Tiber said the baby was taken away, though the mother came by in a cab a few weeks later with her baby in a blanket. He didn't get any names. He never heard from them again.

After four decades, the Woodstock baby trail has gotten colder. The young people who packed into Woodstock are retirement age now. A number of the emergency and medical workers involved, including the concert's medical director, Dr. William Abruzzi, are dead. And if a baby was born onsite, there are curious gaps in the record.

Press accounts at the time mentioning the births did not provide names. Abruzzi wrote an exhaustive account of the event in which he tallied six pages of medical incidents over the three days (11 rat bites, 16 peptic ulcers, 707 drug overdoses, among them). The paper, now in the collection of the Museum at Bethel Woods, the onsite museum, does not mention a single childbirth.

"It could be one of those myths that grow out of major events," said Bethel museum Director Wade Lawrence. "It could be like the story of the New York State Thruway being closed. It wasn't."

Maybe the best argument against a Woodstock baby is that no one in the past four decades has stepped forward to publicly and credibly claim they were born or gave birth at Woodstock. There is a theory that neither mother nor child particularly want Woodstock to define their lives, and have chosen to keep their distinction a private matter.

But it bears saying as the 40th anniversary of Woodstock approaches. If you are a Woodstock baby or a Woodstock mother, please consider contacting The Associated Press at woodstockbaby"at"ap.org.

People have been looking for you.

Todd and Julie Chrisley's son Grayson was hospitalized after a car crash
Thanks for reading CBS NEWS.
Create your free account or log in
for more features.
View CBS News In
CBS News App Open
Chrome Safari Continue
Be the first to know
Get browser notifications for breaking news, live events, and exclusive reporting.