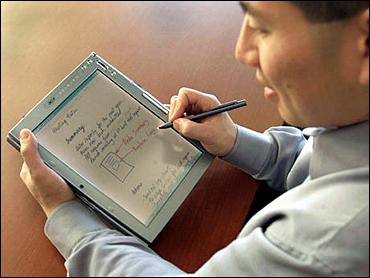 Two years ago at the Comdex computer trade show, Microsoft founder Bill Gates showed off a prototype of "one of the most amazing projects we've ever done." A year later, at last year's Comdex, Gates predicted that within five years "it will be the most popular form of PC sold in America."

Finally, that project is a reality. On November 7th, Microsoft, along with Hewlett Packard, Acer, Fujitsu, Toshiba and other PC companies unveiled the long awaited TabletPC.

These new computers are generally about the same size and weight as what we've come to call "sub-notebook" or "ultra-light" computers. But instead of just using a keyboard to enter data, users are able to write directly on the screen with a stylus.

The devices are driven by a new version of Windows XP called Microsoft Windows XP Tablet PC Edition, which has all the features of XP plus software that allows you to use a digital pen to take notes, store "ink" and drawings and convert handwritten notes to computer text.

The concept behind the TabletPC is that you can take it with you almost anywhere, including meetings or classes where using a laptop PC might be considered disruptive.

You can also use the stylus as if it were a mouse, to select text or commands or click on links in Internet Explorer.

The writing application, called Windows Journal, allows you to write on the screen just as you would with a pen. It even has simulated lined paper that looks a lot like a legal pad. Of course, you can delete or move handwritten notes or adjust the thickness or color of the "ink."

Once you've written your notes, you can simply save them as an image file or you can have the TabletPC try to translate your handwriting into computer text. I use the word "try" because that's all it was able to do with my handwriting. It never could recognize most of what I wrote. To be fair, I have terrible handwriting which is one of the reasons I've taken to computers. I'm much clearer and far faster with a keyboard than with a pen.

An enhanced version of Microsoft Office will allow you to use handwriting within Office applications. You'll even be able to send handwritten e-mail, as if anyone would really want to read someone's handwriting over nicely formatted text.

The good news about the TabletPC is that several of the manufacturers who are shipping TabletPCs are also equipping them with keyboards so you can also enter text as you would with a notebook PC. Also, because the operating system is a "superset" of Windows XP, the machines can run all standard Windows applications.

I've had a chance to play with a number of prototypes of these machines from Acer, Fujitsu and other companies during the past couple of years while Microsoft and its hardware partners were in the process of developing the machines. This week I tried out a nearly final version of Hewlett Packard's offering, the Compaq Tablet PC TC1000 (Compaq is now a Hewlett Packard brand).

The Compaq device, which weighs about three pounds, takes on different characteristics depending on how you are using it. It can look like a .8 inch thick tablet that you work with strictly via its stylus or you can snap the tablet onto a keyboard and use it like a standard sub-notebook PC. Like some small notebooks, the keyboard is a little smaller than what you get with a larger computer, but still quite useable. You can also connect it to a docking station to add a full sized keyboard and monitor which makes it function pretty much like a desktop PC.

Unplugged from the base, the Compaq is like using a thick clipboard. You can carry it around and, because it's equipped with a wireless (802.11b) network connector, you can access the Internet from a couch, conference room or outdoor bench. It actually is a pretty nice way to look at web sites and it's an excellent way to read electronic books. Most companies plan to charge about $200 to $250 more for their tablet PCs than for similarly equipped notebook PCs. The Compaq starts at $1,699.

Acer's TravelMate C100 also has a unique design. Called a "convertible TabletPC," the 10.4 inch screen swivels 180 degrees. In that position it looks like a tablet but when you swivel it around it becomes the cover of what likes like a regular notebook PC.

Unlike the stylus from Palm or PocketPC handheld organizers, the stylus that comes with the Compaq, Acer and most other TabletPCs is electronic which means that if you lose it, you can't just replace it with any old piece of plastic. I'm not sure what the replacement cost will be, but I suspect it will be high enough that you'll want to avoid losing them.

The innovative designs that give you access to a keyboard make this tablet a bit easier to swallow but, frankly, I'm not sold on the concept. That's not to say that there isn't a market for them. They will be handy in certain niche markets where it makes sense to be able to write as you walk around. Already, Federal Express, UPS and other companies have deployed terminals with similar characteristics and I can see these being used for similar tasks. I can also understand their appeal to people who go to a lot of meetings and want a way to take notes without having to pound on a keyboard.

Nevertheless, the TabletPC leaves me with a burning question. If handwriting were such a great way to communicate, why did Christopher Latham Sholes invent the typewriter in 1868?