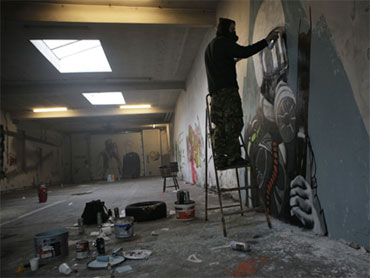 The scene has unfolded countless times in the Netherlands: Young people break into an unused building, move in a table, chair and bed, and then tell the police they are now the official residents — with no permission from the owner and no plans to pay rent.

On Friday, the once-respected Dutch tradition of squatting becomes illegal. It is the latest pillar of the country's liberal institutions — such as legal prostitution and cafes that openly sell marijuana — to be abolished or curtailed as the Dutch become more conservative and rethink the boundaries of their famed tolerance.

In Amsterdam, the epicenter of the movement known in Dutch as "kraken," or "breaking," several hundred people demonstrated Friday against the new law that makes their way of life punishable by up to one year in prison.

As the group dispersed after twilight, some demonstrators threw rocks at police and overturned a car.

"Of course we're going to resist: resisting is part of what we do," said a young English-speaking woman at a "squat," or occupied building, next to the Amstel River. She identified herself only as Lilo.

Most squatters declined to give their full names both for philosophical reasons and to avoid trouble with police or immigration authorities.

A study published this year by Amsterdam's Free University estimated the number of squatters at roughly 1,500 in the Dutch capital, a city of 750,000. Amsterdam Mayor Eberhard van der Laan says he plans to gradually empty the city's remaining 200 squats.

"Here and there squatting definitely causes problems for a neighborhood," he said, but until now it has been seen mostly as a civil dispute between owners and occupants.

Beginning Friday, building owners can argue that squatters are breaking the law, the mayor said. That would "bring us to take action, where in the past we might not have done anything."

City officials said no major evictions are expected Friday, however.

Amsterdam and other Dutch cities remain unusually liberal, even by European standards, but they have gradually moved away from their free-for-all attitudes. Prostitution is legal but has become more regulated, and Amsterdam has shuttered one-third of its brothels. The number of marijuana cafes is declining amid new restrictions to distance them from schools.

Squatting gained public sympathy after World War II during a time of severe housing shortages and anger at real estate speculators. A Supreme Court ruling in 1971 found that entering an unused building is not trespassing. The thinking was that it was humane, or at least pragmatic, not to evict poor or homeless people living in a building that was not being used.

Yet that view changed as the Netherlands grew more prosperous and more sympathetic to business — and today the sentiment often runs against the squatters' antiestablishment world view.

"Once squatting was maybe a romantic thing for people to do, but now they have children and jobs. Things have changed," said Amsterdam city councilman Frank van Dalen.

These days most squatters are migrants from eastern and southern Europe "who want a cheap place to live," he said.

Van Dalen is a member of the pro-business VVD party, which has been a vocal opponent of both squatting and immigration. The VVD will lead the next Dutch coalition government, which may take office as early as next week. Backed by the anti-Islam Freedom Party of populist politician Geert Wilders, the new administration is likely to further tighten restrictions on immigration — particularly from Muslim countries.

At the squatted building on the Amstel, a former fire department office, the squatters — most from other countries — argue against the perception that they just want a parasitic lifestyle.

"The people who are willing to come to a foreign city, with no place to live — to me these are very valuable people, brave people," says Marek Griks, a Polish man who drives a cab part-time and lives at a different squat with his daughter.

He says squatters bring a positive and creative impulse to Amsterdam.

A man from eastern Europe with dreadlocks known as "Muppet" says squatting will continue long after the ban. In his six years in Amsterdam, he has stayed as little as 16 hours in one squat and as long as 2 1/2 years in another.

"I think everything is going to change. It's going to become more of a political struggle again. Not about living for free," he said.

Historically, squatting has provided an alternative to mainstream Dutch lifestyles and has acted as a wellspring for leftist activism. It reached a peak on April 30, 1980, the day of Queen Beatrix's accession to the throne. Thousands of squatters and sympathizers fought riot police throughout Amsterdam, trying to disrupt her coronation. Their motto: "No housing, no crowning."

The economic boom of the 1990s saw an expansion of construction and signaled the beginning of the movement's end. For the past decade, Amsterdam has been emptying squatted buildings at an ever-accelerating pace.

Property owners have also found their own ways to combat squatting, letting "anti-squatters" move into buildings they planned to leave empty in exchange for extremely low rents and ironclad guarantees to leave when asked.

"There's a crucial difference between low-rent and free," he noted.