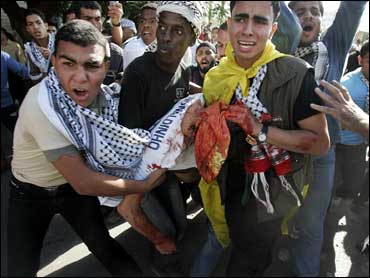 The rally in a Gaza City square, marking the Nov. 11, 2004 death of iconic Palestinian leader Yasser Arafat, posed the strongest challenge to Hamas rule since the Islamic militant group seized Gaza by force in June. It came as Hamas rival Fatah was trying to restart peace talks with Israel.

The images of Hamas policemen facing off against large groups of rock-throwers also challenged Hamas' claim that it has established tight control over Gaza.

Monday's rally started out peacefully. But as the crowd started to disperse, gunshots rang out, sending thousands running for cover and setting off clashes between armed Hamas police and Fatah stonethrowers.

In one confrontation, hundreds of young Fatah activists, some wrapped in their movement's yellow flag, faced off against Hamas police in black or blue-camouflage uniforms across an intersection.

The Fatah supporters pelted Hamas troops with stones, surging forward even as they were met by heavy bursts of gunfire. One Hamas policeman dropped to one knee for better aim. At one point, a young stonethrower collapsed and was carried off by others.

Hamas said it was provoked and that Fatah gunmen, allegedly planted on nearby rooftops, had fired first. Fatah denied the charge, saying no armed men were allowed at the rally. A reporter saw 10 Fatah gunmen being turned away at the start of the rally.

The massive turnout was a boost for Fatah's leader, Abbas, whose security forces in Gaza had suffered an embarrassing defeat at the hands of Hamas in just five days of fighting in June.

Abbas declared three days of mourning for the dead and wounded, ordering Palestinian flags to fly at half-staff.

Fatah's unexpected show of strength Monday came as Abbas prepares for new peace talks with Israel, starting with a U.S.-hosted Mideast conference in Maryland later this month, and tries to fend off Hamas' claims that he does not have a mandate to negotiate.

In a gesture of support for Abbas, Prime Minister Ehud Olmert disclosed plans Monday to release more than 400 Palestinian prisoners before the conference, Israeli lawmakers said. Nearly 9,000 Palestinians are held by Israel, and Palestinians have asked for 2,000 to be freed before the Maryland meeting.

Olmert also predicted it would be possible for Israelis and Palestinians to reach a peace deal.

In a condemnation of Hamas' crackdown in Gaza, Abbas said the Islamic militants had committed a "heinous crime."

Fatah's former Gaza strongman, Mohammed Dahlan, said Hamas' harsh response is a sign its grip on Gaza is weakening. "What is happening in Gaza today is the beginning of the end of Hamas on the popular, religious and moral level," he told Palestine TV. "There will be victory against the killers soon."

Hamas said Monday's events were an attempt to exploit Arafat's memory in order to "cause chaos and confront Hamas."

Monday's rally marked the third day of memorials for Arafat, who in death remains the most popular Palestinian politician; even Hamas has tried to co-opt him, portraying him as a leader who stood up to Israel.

The Gaza City rally began around noon, with more than 250,000 people in buses, on foot and on donkey carts streaming into a large sandy lot near the Mediterranean, close to a Hamas security compound.

Waving yellow Fatah flags, the crowd cheered and whistled as the movement's remaining leaders — most had fled to the West Bank in June — delivered hopeful speeches about a Fatah comeback.

Former policeman Wasfi Ramadan, 42, who attended with his 14-year-old daughter Salwa and 9-year-old son Yasser, said the rally marked the first time since June that he dared to show his support for Fatah. "I felt that the spirit of Yasser Arafat ... is calling us to rise up and come out," he said.

The atmosphere was calm at first. Some of the Hamas policemen wore black-and-white checkered headbands in a tribute to Arafat, and didn't even respond when some marchers taunted them with chants of "Shiites, Shiites," mocking Hamas' close ties to Iran, ruled by Shiite Muslims.

The crowd was starting to disperse when the first shots rang out, sending thousands running for cover.

Bodyguards for a senior Fatah official, Ahmed Hiles, grabbed their boss, bundled him in a car, draped themselves over the vehicle for cover and sped off. Two of the guards are known to carry pistols, but were not seen using them.

Demonstrator Farouk, 24, said he was walking away when he got shot in the leg. "I felt something hot hitting my leg. I fell down and started screaming when I saw blood. It was a big mess and everyone was running for cover," said Farouk, who did not want to give his last name for fear of repercussions by Hamas.

Farouk said he saw a man in a wheelchair trying to hide near a wall. "After a few minutes, a group of young guys helped me get into a car, and I was taken to a hospital," he said.

One Hamas policeman was hit in the head by a stone and was taken away by a colleague. A few Hamas policemen stood on a nearby balcony, and fired in the air after being pelted with stones and bottles.

As the clashes died down, Hamas security searched trunks of cars and several people were taken away in Hamas police jeeps. By nightfall, Hamas had pulled most of its security forces off the streets.

Hamas spokesman Sami Abu Zuhri held Fatah responsible for the violence, saying Fatah gunmen had been posted on high-rise buildings overlooking the rally to shoot at Hamas police officers, as a planned provocation.

Hamas said five of its policemen were wounded by sniper fire from the roof of the pro-Fatah Al Azhar University near the rally.

"If Hamas was planning today's incidents, why would we have allowed the rally to take place?" Abu Zuhri told a news conference.

Later Monday, more clashes erupted during the funeral for one of the victims, 19-year-old Ayoub Abu Samra, who witnesses said had been shot dead after getting into a scuffle with a Hamas policeman. During the funeral, mourners fired in the air, and said Hamas police fired at the procession.

Three people were hurt, including one by gunfire and two by beatings, rescue workers said.