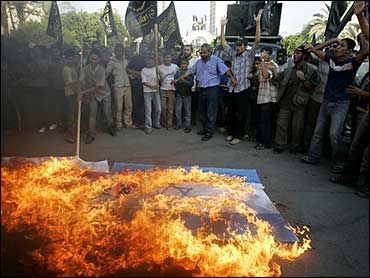 Militants holding an Israeli soldier demanded Saturday the release of 1,000 prisoners and a halt to Israel's Gaza offensive, complicating efforts to resolve a crisis before it boils over into major fighting.

The latest demand came after Palestinian Prime Minister Ismail Haniyeh said that Israel's military action was aimed at toppling the Hamas-led government, but maintained he is working with mediators toward a resolution.

Israel, meanwhile, kept up the pressure Friday in Gaza, destroying the interior minister's office and targeting a car carrying militants in an airstrike. Israel also said it attacked a militant cell, killing a local Islamic Jihad leader — the first reported death in the offensive.

But on Friday night it was "weirdly quiet," reports CBS News correspondent Sheila MacVicar. One reason for the calm could be a report on Israel TV tonight that says that a doctor has seen the captured Israeli corporal and that he is alive and has had treatment for his wounds.

"If Shalit is released we will immediately de-escalate," said government spokesman Mark Regev. "That will create a positive momentum that will help us get back from the edge of the cliff."

But, MacVicar reports, if he's not, then Israel will most certainly proceed with its incursions.

Israeli defense officials believe he suffered slight wounds, but is still alive. Israel has ruled out a prisoner swap.

Haniyeh urged his people to remain steadfast. Though he did not directly address Israel's demand that militants hand over the abducted soldier, he implied the government would not trade him for eight Palestinian Cabinet ministers detained by Israel on Thursday.

He also accused Israel of using the soldier's abduction as a pretext for launching a major offensive with the aim of bringing down his government.

"This total war is proof of a premeditated plan," he said.

Haniyeh spoke in a sermon at a Gaza mosque on Friday, the Muslim day of worship, as Hamas gunmen stood guard outside. It was his first public appearance since Israeli Cpl. Gilad Shalit, 19, was captured Sunday in a militant raid on an army post in Israel that sparked the crisis and sent Hamas' top leaders into hiding.

Israel sent troops into southern Gaza on Wednesday — the first major raid into the territory since Israeli soldiers pulled out last year after a 38-year occupation — and began a wave of airstrikes across the coastal strip.

The United Nations said a strike that destroyed Gaza's only power plant had pushed the territory to the edge of a humanitarian crisis, and the International Committee of the Red Cross said it was working to get the military blockade of Gaza lifted for aid shipments.

With troops massed on the border, Israeli officials on Thursday postponed a planned invasion of northern Gaza as international mediators sought a way out of the standoff.

Haniyeh said Friday he was in contact with Arab, Muslim and European leaders to try to resolve the crisis, "but this Israeli military escalation complicates matters and makes it more difficult."

The Bush administration called on the Palestinians to free Shalit and on Israel to practice restraint.

"We are encouraged by the fact that the Israelis are standing down in Gaza and that Hamas is talking openly about repatriating the soldier, and we continue to watch the developments," White House spokesman Tony Snow told reporters.

Egyptian President Hosni Mubarak said in an interview published in Egypt's Al-Ahram newspaper Friday that his government had been holding talks with Hamas leaders, who agreed to conditionally release Shalit, but Israel had not yet accepted the agreement.

He said Israeli Prime Minister Ehud Olmert had promised not to rush into a military offensive, but to "give additional time to find a peaceful solution to the problem of the kidnapped soldier."

Israeli officials said they knew nothing of an agreement and denied cooperating in any talks. "There are no negotiations," government spokesman Asaf Shariv said.

"We hope that today or tomorrow the Egyptian brothers, especially now that Mubarak is involved, will reach an acceptable solution, a solution that will avoid suffering for the Palestinian people," Palestinian legislator Mohammed Dahlan said after the meeting.

Mohammed Nazal, a Damascus-based Hamas leader, said he believed Israel was stalling. "They're buying time until they can locate the soldier through intelligence and then try to free him," he said.

With negotiations appearing to bear no fruit, Israel continued its air assault in Gaza on Friday.

In a pre-dawn attack, Israeli missiles destroyed Interior Minister Said Siyam's fourth-floor office and the ground-floor office of one of his bodyguards. The floors in between — where passports and ID cards are printed — were left untouched.

The military said it targeted the ministry because it was "a meeting place to plan and direct terror activity."

On Friday evening, an Israeli airstrike targeted a car in Gaza City. Witnesses said a missile exploded next to the car, slightly wounding three members of the militant group Islamic Jihad.

Khaled Abu Hilal, an Interior Ministry spokesman whose office also was destroyed in an airstrike, called on Palestinian security forces to mobilize to repel an Israeli attack.

However, the ministry, which is supposed to run the security forces, was stripped of much of its authority by Abbas in a power struggle following Hamas' victory in January parliamentary elections. Abbas, the moderate leader of Fatah, was elected separately last year.

Pushing against Hamas on all fronts, the Israeli Interior Ministry on Friday revoked the Jerusalem residency rights of four senior Hamas officials. The unprecedented measure takes away their right to live in the holy city and travel within Israel freely.

Israel's army said it also attacked a cell that attempted to fire an anti-tank missile at Israeli forces in southern Gaza. Mohammed Abdel Al, 25, a local leader of Islamic Jihad, died of wounds he suffered in that airstrike, becoming the first death in Israel's offensive.