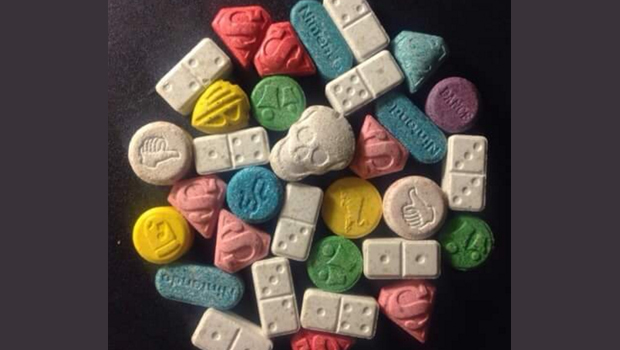 Parents across the country may have been spooked by warnings spread through social media in recent days, raising fears that Ecstasy tablets could be mistaken for brightly colored Halloween candy -- potentially putting children at risk.

Police in Jackson, Mississippi, posted about it on their Facebook page, and the warning went viral.

"If your kids get these for Halloween candy, they ARE NOT CANDY," the post said. "They are the new shapes of Ecstasy and can kill kids through overdoses!!!"

The photo showed Ecstasy tablets shaped like dominoes, skulls and Superman's shield, and urged parents, "When it doubt, throw it out."

CBS Cleveland affiliate WOIO talked to local police who agreed that downing the drug like candy would be a dangerous mistake.

"They'd be in the emergency room without a doubt. The Ecstasy, amongst other things, it causes you to grind your teeth and you hallucinate. That would be extremely frightening for the child, the parents as well," Capt. Guy Turner of the Westlake, Ohio, police told the station.

But if you've seen these warnings in your Facebook news feed, there's no reason to panic.

In fact, according to the myth-busting website Snopes.com, these drugs have been around for years in the same shapes and colors, and there's no evidence anyone has ever slipped them to a child in a trick-or-treat bag.

"The 'ecstasy in Halloween candy' warning looked to be a variant of age-old rumors about poison (and other dangerous substances) being randomly handed out to children in trick-or-treat loot, a persistent but largely baseless fear that's dogged Halloween celebrations for decades," Snopes.com said.

Moreover, the site notes, "The small collection of pills depicted here represents a street value of hundreds of dollars, so the notion that a neighbor would be distributing them to trick-or-treaters for no ostensible reason is rather implausible."

Ecstasy is a form of MDMA, a popular illegal party drug also known as Molly. The National Institute on Drug Abuse describes it a "synthetic, psychoactive drug" that "produces feelings of increased energy, euphoria, emotional warmth and empathy toward others, and distortions in sensory and time perception." The initial rush of euphoria is often followed by an emotional crash. The drug can also cause a dangerous increase in heart rate and blood pressure, as well as side effects like muscle tension, nausea, blurred vision, faintness, and chills or sweating.

While the likelihood of Ecstasy falling into the hands of trick-or-treaters seems remote, parents should always be careful to check the candy their kids bring home on Halloween.

Here are some Halloween safety tips from the U.S. Food and Drug Administration: