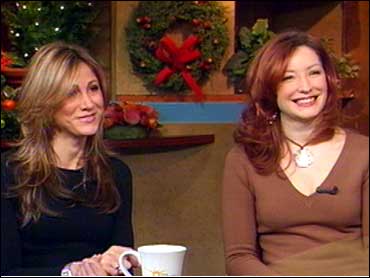 It's the halfway point of The Early Show's big dating-game challenge.

Advice columnist E. Jean Carroll believes that any woman can find the man of her dreams in just six weeks if they follow the advice in her book, "Mr. Right, Right Now."

The Early Show found two women, Lirone and Tracy, to put her theory to the test.

In week one, we identified their "man-chasing styles" at a party packed with guys.

In week two, they tried to build their confidence by hitting a gym packed with guys.

This past week, their homework was to overcome their fears of approaching men by going to Grand Central terminal in New York City and exchanging numbers with 20 men they liked.

"It was very difficult. It really was about overcoming your fears," Tracy says. "I've never approached a man before in my life."

For Lirone, it was quite the opposite. She says, "I'm actually pretty assertive, but I don't come off as aggressive. This was a situation with the cameras; it made it really hard to go up to people. Men are immediately like, 'Oh, my God, the cameras, what's this about.' But I think men are actually flattered when women come up to them."

Following their own instincts, they were to use E. Jean's tips to approach them:

E. Jean tells The Early Show co-anchor Hannah Storm she was pleased with the way the assignment went.

She says, "Most women would rather jump out of a plane than go up to a strange man. And they were brilliant. And may I preface this saying we've received e-mails from women across the country and they say, 'Give these two women six weeks and they could find Mr. Right because they're so young and pretty and thin.' I just want to say to every woman out there, no matter how old you are or if you weigh 280 pounds, 180 pounds, 108 pounds, if you take a risk like these two young women did and grasp the moment and go up to a man and say, 'hi,' you, too, could have a date with that adorable guy. So it will work, you just have to overcome the fear factor."

Lirone got a date with one of the men and Tracy got a phone call.

The idea behind the "Mr. Right, Right Now" intensive man-meeting session was to force Lirone and Tracy to go to a man so many times in an hour, they would get tired, and their bodies would become too exhausted to respond with stress, ending up just being themselves, says E. Jean.

Here are a few mistakes that both Lirone and Tracy (and most women make) as well as E. Jean's advice to fix them:

Now that Tracy has 14 phone numbers and Lirone 17, the women's next assignment is to learn how to manage many men at the same time. They will choose six men and have a games night. "Monopoly, charades and poker with your six favorite guys," E. Jean says.

The following is a refresher of the weekly goals.