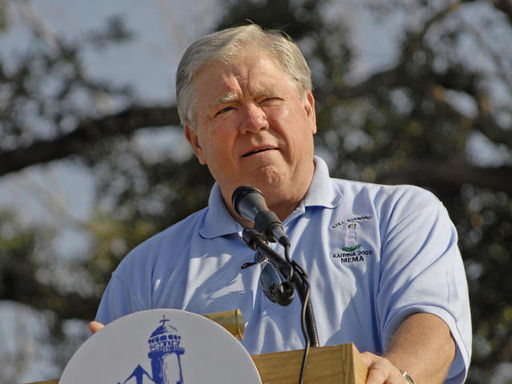 A spokesperson for Mississippi Gov. Haley Barbour is pushing back against criticism from liberal pundits today over the governor's praise for a segregationist group.

Here's the backstory: Over the weekend, the conservative magazine the Weekly Standard published profile of Barbour, a major GOP operative and potential 2012 Republican presidential candidate. The profile highlighted Barbour's ties to his hometown of Yazoo City, Mississippi, where schools were integrated without violence during the Civil Rights era.

Barbour, who was only a few years out of school himself at the time, credited the lack of violence to the Citizens Councils, a segregationist group that resisted integration through economic means.

...Yazoo City was perhaps the only municipality in Mississippi that managed to integrate the schools without violence. I asked Haley Barbour why he thought that was so.

"Because the business community wouldn't stand for it," he said. "You heard of the Citizens' Councils? Up north they think it was like the KKK. Where I come from it was an organization of town leaders. In Yazoo City they passed a resolution that said anybody who started a chapter of the Klan would get their ass run out of town. If you had a job, you'd lose it. If you had a store, they'd see nobody shopped there. We didn't have a problem with the Klan in Yazoo City."

Dan Turner, the official spokesman for Barbour, told Talking Points Memo that criticism of the remarks were intended to paint the governor as a racist -- when "nothing could be further from the truth."

"Tell me what in Gov. Barbour's past gives any indication of any racist leanings, and I'll be glad to address the question," Turner said. "Otherwise, it's not a legitimate question. There's nothing in his past that shows that. If you pick out a sentence or a paragraph out of a fairly long article and harp on it, you can manipulate it. And that sounds to me like what you're trying to do."

Ben Smith of Politico, meanwhile, points to another potentially-problematic remark from Barbour's past. A 1982 New York Times article details an anecdote from the campaign trail (Barbour was running for Senate) in which an aide used a racial slur. The Times reports that "Barbour warned that if the aide persisted in racist remarks, he would be reincarnated as a watermelon and placed at the mercy of blacks."

Greg Sargent, a liberal blogger for the Washington Post, argues that Barbour's statements on racial issues could seriously hurt his chances as a presidential contender.

"Barbour has repeatedly been overly casual about matters of race," Sargent writes. "He seems incapable of acknowledging that race is the third rail of American politics, or even acting as if that's the case."

Hari Sevugan, spokesperson for the Democratic National Committee, jumped on Barbour's remarks, tweeting, "Re Barbour's "not that bad" comment: He's not ready for prime time or not ready for the 21st century - either way it's disqualifying."