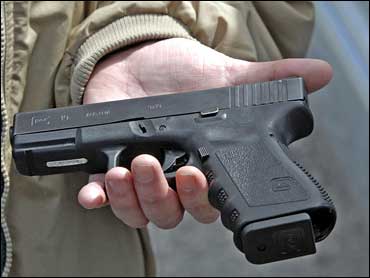 The semi-automatic pistol Jared Loughner used to kill six and injure 13 others, including Congresswoman Gabrielle Giffords, D-Ariz., was purchased legally, according to the Washington Post.

Law enforcement sources told the newspaper that weapon was legally purchased on Nov. 30 at Sportman's Warehouse in Tucson.

"This stuff should never happen," store manager Reese Widmier told the Washington Post. "We're cooperating with the ATF and all the federal agencies to help with this tragic incident."

A source was unsure whether Loughner himself purchased the gun, or if someone else did, reports CBS News. A legal sale would involve the purchaser filling out paperwork and a background check to determine if the buyer is allowed to purchase a gun.

A source with knowledge of the gun involved in Saturday's shooting says the weapon used was a Glock 19 9mm semi-automatic pistol.

The gun normally retails for $499, a manager at the Tuscon store told CBS News, while declining to confirm the purchase. Sportman's Warehouse is national chain with stores in 25 states, according to its website.