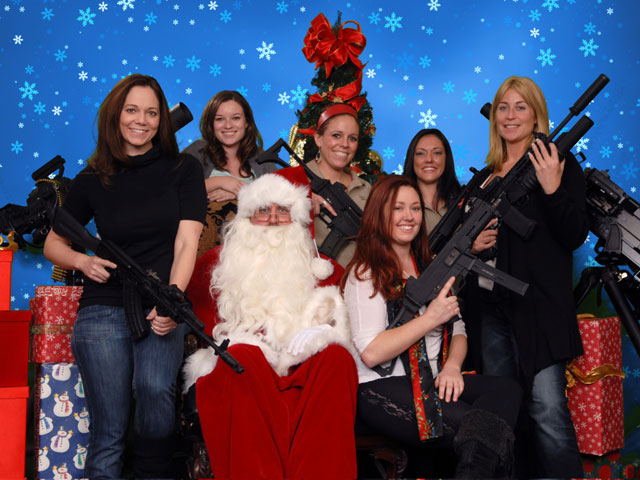 PHOENIX - An Arizona gun club is offering a chance for children and their families to pose for photos with Santa while holding pistols and military-style rifles.

One image shows Santa in a wingback chair with a snowflake background, a Christmas tree behind him and flanked by an $80,000 machine gun and a tripod-mounted rifle. Next to Santa is a man standing behind a boy, who is holding an unloaded AR-15 with an attached grenade launcher.

In another photo, Santa cradles a toddler dressed in camouflage, while a man and woman stand close by with rifles with foldable stocks. In yet another image, five beaming young ladies pose with AR-15, an AK-47 variant and other rifles as they surround old Saint Nick.

Ron Kennedy, general manager of the Scottsdale Gun Club, said the business got the idea for the photo op last year when a club member happened to come in dressed as Santa and other members wanted their picture taken while they were holding their guns.

"Our customers have been looking for a fun and safe way to express their holiday spirit and passion for firearms," said Kennedy, noting people have used the photos for Christmas cards and Facebook posts. About 500 people showed up to the event Saturday to take a total of 150 photos when the first of two such events was launched.

Kennedy, whose club offers guns for sale and rental and has a 32-lane indoor shooting range, said the event wasn't aimed at children, but the club supports the right of parents to include their children in the photos and believes that's a personal choice.

The guns used in the photos aren't loaded and have had their firing pins removed, and their chambers are regularly cleared to ensure safety, Kennedy said.

To buy a semi-automatic rifle in the United States, a prospective purchaser must be at least 18 years old and cannot be a convicted felon. The requirements for prospective buyers of fully automatic machine guns include being at least 21 years old, not being a convicted felon and getting a special license from federal firearms agents.

Democratic state Rep. Steve Farley, who proposed an unsuccessful ban on large-capacity gun magazines like the one used in the Jan. 8 mass shooting in Tucson, Arizona, that killed six people and wounded Congreswoman Gabrielle Giffords and 12 others, said the gun club's photo op was inappropriate.

"To involve machine guns and Santa in a celebration in the birth of Jesus Christ is the worst kind of heresy I can imagine," said Farley. "I would suggest that the people who created this read some of the New Testament."

Kennedy said the club is simply trying to provide a safe holiday event that's an expression of their passions. "It's more of a celebration of their Second Amendment rights," Kennedy said.

He said the club will continue holding the events in future years if there's a demand from customers for it.

This is the second year the club has offered its "Santa and Machine Guns" photo opportunities. The club plans another opportunity with Santa on Dec. 10.

Club members can get a print and digital photo for $5, while an image with Santa will run a nonmember $10. The subjects of the photos have a choice of posing with other guns ranging from pistols to military-style rifles.

How celebrities are ringing in the New Year
More