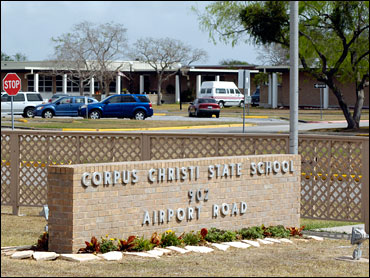 CORPUS CHRISTI, Texas (CBS/AP) Prosecutors say fights between disabled residents of a state-run facility were staged by employees for "entertainment." The jury, clearly not amused, convicted one man Thursday for injuring some of Texas' most vulnerable residents in the orchestrated bouts.

Jesse Salazar, 25, was one of six former employees at the Corpus Christi State School charged in an abuse scandal that police described as a "fight club."

The jury found Salazar guilty of intentionally causing injury to a disabled person, a third-degree felony. The trial immediately moved into the penalty phase. Prosecutors asked for the maximum of 10 years in prison, while Salazar requested probation.

The jury did not reach a decision on the sentence before the end of the day and was to resume deliberations Friday.

Salazar, testifying for the first time during the penalty phase of the trial, said he had grown close to some of the residents and was sorry for what happened.

"It was dumb," Salazar said. "I'm sorry for what took place and it shouldn't have happened."

For more than a year, authorities said, staff on the night shift in one of the Corpus Christi facility's dorms staged fights among the residents. They instigated the bouts with direct commands and pranks aimed at spurring the residents to turn on each other, police said.

Almost 20 videos of the fights were discovered in March when a cell phone containing the images was found at a clothing store and turned in to police. The four videos shown to jurors in Salazar's case were filmed in early 2008.

One video showed a resident running around a room screaming while another resident tried to hit him. Salazar could be seen filming the melee with his cell phone. In another video, Salazar appeared to tell a resident to push a far bigger resident to instigate a fight.

Salazar blamed a lack of supervision at the facility that placed young, inexperienced staff in the positions and co-worker Timothy Dixon, who was older and physically intimidating. Salazar also alleged that some supervisors were aware of the fights but did not report them.

"They planned this. They did this on a regular basis," Nueces County Assistant District Attorney Doug Mann said in his closing argument Thursday. "This was all about their entertainment."

Depending on the outcome of the penalty phase, Salazar could be the first of those charged to serve jail time. Vincent Johnson, another former employee, pleaded guilty last week and received a two-year suspended jail sentence.

More indictments could be in the works. Corpus Christi Police Detective Curtis Abbott testified Thursday that the number of suspects in the case had risen to 12 and of those, cases had been prepared against at least three more than the six already charged.

Salazar's attorney, Cecil Starcher repeatedly turned attention toward Dixon, whom police had signaled as the mastermind of the fights. He said Salazar had intervened to stop the fights.

Mann answered that Salazar only intervened when the fights got to the point that a resident might receive a visible injury that would later have to be explained.

The trial of another former employee, Stephanie Garza, is scheduled to begin Monday. It is unclear how it will proceed because the district attorney granted her immunity in exchange for her testimony. She testified in Salazar's case, but the judge in her case has refused to approve the deal.