Before you mock "Guiding Light," consider this: When it debuted on the radio on Jan. 25, 1937, FDR's second term was just five days old, and Time magazine had just described television as "science which shows no serious signs yet of becoming an industry."

It hasn't been easy to keep the show and all its plotlines going for 72 years.

When it started on radio, the show centered around a minister who kept a light on in his study where his parishioners would come to seek guidance.

When television finally did become an industry, "The Guiding Light," as it was called then, made the jump and held on to become television's longest running drama. But after this Friday's show, there'll be no more cliffhangers - just a cliff. The ratings fell off.

For most of the last 28 years, Kim Zimmer and Robert Newman have carried on as Reva Shane and Josh Lewis. My, how they've carried on.

"Do you remember how many times you've been married?" CBS News Correspondent Richard Schlesinger asked Zimmer.

"I believe it's nine," Zimmer said.

"Three times to the same man," Zimmer said. "To Joshua, the love of her life."

"I married every male member of one family," Zimmer said.

"Olivia once and Riva's sister once," Newman said.

And it's not just romance that is tangled in the could-be-anywhere town of Springfield. Josh, Reva and the others have led lives plagued by perils Pauline could never imagine. Memory loss, mystery diseases, miracles and misadventures are part of their everyday lives Several years back, Reva drove off a bridge in Florida and somehow washed ashore on a Caribbean island called San Cristobal.

"I became the princess there," Zimmer told Schlesinger. "I married the handsome prince. Then the bad brother threw me back into the water from whence I came, and that's when I floated up to Amish country, and I became Amish."

Despite the sometimes wacky plots, the show gave a serious boost to some actors you've heard of, including Billy Dee Williams, one of the first African Americans on network soaps, appearing in the '50s as Dr. Jim Frazier.

And Kevin Bacon played the troubled youth TJ Werner in the '80s.

By the time the show ends Friday, the various characters will have made it through 15,762 episodes.

Audrey Thaler has seen or heard almost all of them. She's 89 now and got hooked on the show when it started on the radio.

"It's become a part of my life," Thaler told Schlesinger. "When my children were young, they would be in the playpen watching it while I'd be ironing or doing something else. I just became accustomed to watching it all the time."

She remembers a simpler day when the raciest plot was about alcoholism.

"Oh, my goodness," Thaler told Schlesinger. "Now, they're all hopping into bed … Sometimes I have to close my eyes and then peek with the other eye to see if the scene is over." 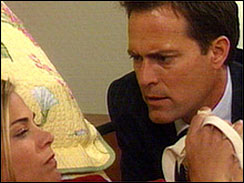 For the last several years there's been real-life drama behind the scenes of "Guiding Light." As game shows, reality shows and cable television siphoned off viewers, there was, as the soap writers might say, a desperate battle for survival.

"The show had been on the chopping block for 15 years," Ellen Wheeler, the show's executive producer, told Schlesinger. "We said, 'We're going to have to do this show for 35 percent less money. We're already doing it for less than anyone else. What can we do?'"

They started shooting with cheaper equipment not much fancier than home-movie cameras. They shot more scenes out of the studio in Peapack, N.J. Offices were made over to double as sets including the executive producer's office, which is seen on the air as a seedy motel room.

On the day we were there, they were shooting a sexy scene - a jewel thief with his female lawyer - and the plot called for a surprise ending, so the writers decided to have the bed collapse as the lovers fell on it.

But "Guiding Light" was fighting powerful forces. Its audience wasn't just shrinking. It was wrinkling. In television, youth sells mostly because youth buys, which is why advertisers look for young viewers, very few of whom were watching "Guiding Light."

For five years, Sheraton Kalouria was in charge of daytime programming for NBC, which cancelled a soap last year. He watched the decline of a lot of soap operas play out before his very eyes.

"Maybe its audience didn't survive," Kalouria said about "Guiding Light." "I mean that in the literal sense that this was an audience that, at 72 years of age, you can imagine the one way you age out of watching a show like that is to pass on."

"When you were in charge of daytime, when did you start noticing that you were in trouble?" Schlesinger asked.

Soaps have tried to remain relevant by trying to become topical. They introduced stories about breast cancer and rape among other subjects once considered taboo.

"There are very few taboos left to be exploited from a dramatic standpoint because there are so many outlets chasing after that," Kalouria , told Schlesinger. "Whether it's daytime talk, whether it's news programming, whether it's the reality shows which bring some of these to life. I think we've gotten to the point where truth really is stranger than fiction.

And people who used to watch soaps - mostly women - have other things to do now like working.

But Audrey Thaler still has time for her story.

Like hundreds of other fans, she was at The Paley Center for Media in New York last month when a farewell party of sorts was held for the dearly departing program.

"These are the true believers, fans to the end," one devoted fan said.

When they finished shooting the final scenes last month for once there were at least as many tears off camera as on.

"You were the most important people in my life," Zimmer said once the cameras stopped rolling.

But some of the actors have already moved on. Robert Newman who played Josh is in an off-Broadway musical. 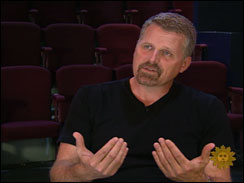 (CBS)
He plays a therapist who hears everyone's problems and has a secret love that is tormenting him, a perfect role for a now former soap star.

"What we've done on the soap opera, we've done goofy story lines on the soap, but, really the best of what we do really very much reflects what people experience in their own relationships, whether it's with their spouses or whether it's with their siblings," Newman (left) told Schlesinger. "You know, I think it's important that we sit and we sort of witness that. We laugh with them, and we cry with them. We heal with them. All those things happen sort of once removed. That won't be there. You know, you won't get that from a game show."

After this Friday when the show ends, it will in fact be replaced by a game show. And Audrey Thaler will have an extra free hour every weekday.

"What will you do when this ends?" Schlesinger asked Thaler.

"Well, I won't get involved in another soap opera because I don't have another 72 years to spare."